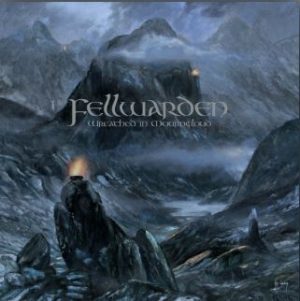 I suppose that atmospheric black metal can cross over into folk metal territory from time to time. Even if it doesn’t, I am still a fan of most acts in this sub-genre and welcome the chance to jump back in and review when they arrive here. The 2nd full length from the UK’s Fellwarden just arrived far in advance of the anticipated release date of June 26th on the mighty Eisenwald. Entitled “Wreathed In Mourncloud” the new album will feature 6 tracks at 54 minutes so a 9 minute per track average. The album cover is killer with another Kris Verwimp masterpiece adorning the album so off to a good start even before listening. I reviewed the debut “Oathbearer” from 2017 and was impressed at the bleak dark folk touches and overall vibe. The 2 members (The Watcher and Havenless) are both still in the fold in the epic Fen and while I want to say there is a connection to that project, this does stand alone as an entirely different entity. For our purposes here I still think that Agalloch might be the closest act to compare them to although maybe not as much acoustic driven but more of the mood created by the tracks/style. I actually think that The Flight Of Sleipnir could be another favorable act for comparison but less doomy, bombastic and trippy. Listening to this back to back with the debut, I could definitely hear some changes in song writing approach with more intricate riffing and interesting progressions in terms of direction. While the tempos of the tracks never really deviate once they are in the pocket, the riffs and layering really add a feeling of transition from part to part within each epic track. Don’t worry as there are plenty of blast beats for you speed freaks but done so that they don’t seem frantic and desperate. Despite the bleak cover and overall aesthetic of Fellwarden, I actually felt the songs to be somewhat uplifting at points. Vocally, the black/death style really makes an impact when juxtaposed with the cleans and chorals throughout. While I think “extremists” or “elitists” will feel that this album lacks some of the darkness of other albums, “Wreathed In Mourncloud” definitely differentiates itself with a mood and feel that is hard describe……dreary and hopeful at the same time. If I had a criticism, I felt that some parts seemed to be a little sparse in terms of the synergy of the various instruments….there did seem to be some disconnected parts here and there. The overall sound is smooth but discernable with plenty of reverb and separation. I am not sure how this album will be received in general as it doesn’t fit into a specific, easy to define category. For those of you that like that gray area between the middle of the road and ultra-heavy, Fellwarden have fit a need in that transitional area for those wanting something darker than the norm and accessible for all listeners.