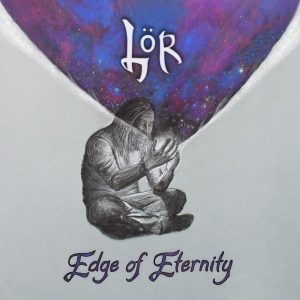 Is it okay keep asking what a weird time it is we live in? Every week there’s some horrific new reality to accommodate and ingrain into our routines. Not to mention all the personal aspects irrespective of societal crisis. A well timed album can be not just a beacon but perhaps lifeline when hope is all but lost and Lör’s spontaneous sophomore release is no different.

The Philly quintet must’ve felt tremendous anxiety after a successful, albeit under-appreciated debut album. And we have to admit, less than a day’s long announcement period alleviates some of that pressure, so kudos for wit. There is unmistakable growth from “In Forgotten Sleep”, of which my only critique was the occasional muffled rhythms. Lör’s new offering radiates with riveting string, key and vox leads and like its predecessor, “Edge of Eternity” is an ambitious, charismatic composition, full of propelling rhythms and more than memorable melodies.

Apparently there was a difficult decision in anointing Upon a Withered Heart the opener but probably the right one, on spirit alone. Though Peter Hraur’s canorous complexity, Nick Bonsanto’s proportional variations, Greg Bogart’s balanced placement and Matt Bartlett’s choice ambience are showcased with versatility and layered in creative transitions to and fro emotional swings on all tracks. Tyler Fideli’s lead and gang vocals also set a buoyant, decisive aura early on and command attention throughout. A Life Once Known, gallops in equally energized and even encompasses a, GHASP, Queen-like guitar lead! Is Lör like Queen? Maybe only a little but bet your British accent they’ve made sure to incorporate a cheerful innuendo. Now a great album is not enough, the band and some dedicated associates supplemented Ruin with a stunning visual to augment the most peculiar, heaviest and progiest track of the album. Nefarious and at times disorienting inflection, epic lyric themes and the always precisely placed harsh vocals enforce self-reflection midway as an antithesis is met with Relic. I’m brought to tears in the final moments of mutual vulnerability transitioning to the title track and Edge of Eternity finalizes on a vital, affirmative note, springing hope eternal.

Lör inundate authenticity, from the independent production and original composition to Greg’s breathtaking artwork. This album is an ideal combination of novelty and nostalgia, deeply rooted in progressive elements of classics like Uriah Heep that mold into superlative, contemporary, power. Lör belong to a small collective of modern American metal acts that are as adventurous as they are confident in integrating a breadth of influences into a dramatic but cohesive unit with harmonious, valiant instrumentality that refuses to un-burrow from my psyche. Is the album a bit short? Sure, but there is no shortage of creativity with rumors of another looming release. Additionally, each member has notable projects worth exploring and personally, I can’t get enough! Edge of Eternity catapults to this year’s best lists and promises to garner well-deserved validation.