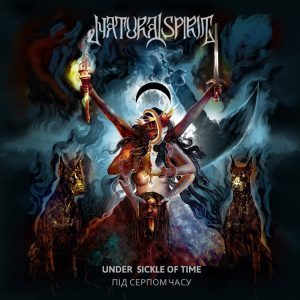 Most of you might discover Natural Spirit via some web surfing and may not realize they have been in existence for over 20 years. How is that possible and you aren’t familiar with them? There has been almost 10 years of inactivity and it looks like a reemergence has just happened. A new album has been revealed with “Pid Serpom Chasu” which I translated as “Under Sickle Of Time”….well it is translated on the cover). Featuring 8 tracks at 37 minutes or so, the album was released on May 18th on Epidemie Records. From a configuration point of view there is only 1 original band member remaining in guitarist and vocalist Oleg Kirienko with current members guitarist Olexiy Samovol and vocalist Antonnia Vinnyk both joining later in the process. However, this act used to contain more members so parts like bass, drums, keys, etc are being filled in with guest musicians. How does this effect their sound? I think compared to earlier albums there is more cohesion, and this is their most riveting and solid album to date. First off you do have to take into consideration the fact that old albums do not have the sound quality of the new one which would be unfair for comparison. Just basing old albums to the new one on musical merit alone, the tracks seem to be more focused and just overall catchier. Sound similar acts? Russian acts like Grai or Zmey Gorynich come to mind on some level with the equal use of male and female vocals but that may be where the similarities end. They fall somewhere in the crossroads of power, thrash and folk metal in my opinion. The tracks average between 4-5 minutes each which works with their style and they pack a decent amount of interesting riffs into each track. The lyrics are in their native Ukrainian which fits rather than opting for English. Despite being officially a 3 piece, there is an ample amount of folk instrumentation and keys throughout…..I hear bagpipe and mouth harp I believe. There is also an ample amount of guitar soloing which is not a big part of folk metal per se. The tempos are slightly above mid-tempo on the whole withe exceptions like “I Can’t See God” turning up the speed a little bit. There are a lot of great intros and interludes to set up most of the tracks whether sound effects, keys or vocals which help create the mood for the rest of the listen. I appreciated that this was a quick listen and not an hour plus of music which for me seems to get harder to obligate time for. I found the overall sound to be somewhat shrill at points or maybe just overly bright, but I still found the depth and detail enjoyable. Much like the return of XIV Dark Centuries, Genrnotshagen, Falconer and Finntroll in terms of taking a long layoff, Natural Spirit have come back better than ever in a solid return album for 2020.