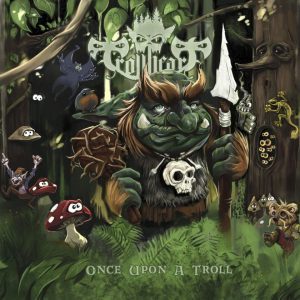 The trolls are invading the world! The Finns have Finntroll, the Norwegians have Trollfest, the Canadians Trollwar and Dream Works released “Trolls 2” lately. With the release of “Once upon a troll” of Trollheart the French are the next ones who can proudly say to have their own Troll Metal Band. Out of the forests of Nantroll (Nantes) “The Troll” (as multi-musician) is spreading his interpretation of Troll-Metal, which is basically a mix of Folk/Black Metal. Already on the 04.12.2019 Trollheart was announcing via Facebook in a small video the foundation of this new folk metal band and in the same go he also announced his participation on the famous “Lid Ar Morrigan IV” Festival with no other headliner than the pioneers of Trollfest. A new Troll was ready and the promotion machinery started, trailers, the first offical video to “Scream to the Forest” and a lot of troll-funny posts as the opening of Linkedin, Instagram and Tinder accounts, happy valentines greetings and the Trolls birthday video followed. Everything seems to run very well, beside the fact the release party of the album was actually planned for Lid Ar Morrgian on the 16.05.2020, but due known reasons the event needed to be postponed into 2021. Anyway a real troll can take such a hit and correctly announced to his fanbase to “stay at the hut” and also stated to donate to the medical staff. In my personal view you can not promote a new band better then the Troll did. After a small Intro “The Awaking” the album hits off with the first song “Anger and Hunger” which blasts off with a harsh mix of epic folkly black/death metal while the Troll is growling and grunting his lungs out. Of course the lyrics are all set up upon the demands of a real troll, so that the next song “The Hunt” is all about the desire of the troll in eating and hunting humans in his forest territory. This topic is actually running with some exceptions through the whole release. Sometimes in a very direct approach like on the song “Scream of the Forest” and sometimes in form of a story like on “La-Le-Lo” ( the endless battle between kings, princesses and trolls, of course in this one the troll wins 🙂 ). Basically the album consists of 9 songs and 4 Interludes ( Intro, Interludes, Trollish Outro ) and The Troll build around himself his own world including blubbery pots, lumberjacks as victims, swampy woods and of course his hut. All this details are perfectly put in place and can be also found in the great mix of epic folk black/death metal. It is impressive that this release was done by one person only. As we are just at the beginning of the history of Trollheart I sincerly hope to hear more from them in future. With this debut they certainly set a fantastic step into the right direction.