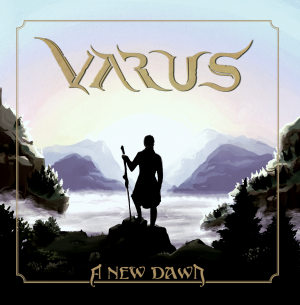 Prepare for the next epic journey of 2020 when Varus out of Bamberg (Germany) is releasing their second full lenght release “A new dawn”. The four Bavarians are already active since 2012 and with their debut “Till the sun rises” in 2014 they could already draw attention to them in the Folk Metal Scene. Their style could be defined as Symphonic Folk Death Metal or as they describe it by themself just as “Epic Bombast Metal”. When the first track of the release “The Awakening” hits off, I would rather intend to use their own definition, as a nine minute long epic bombast track awaits you. A nearly orchestral intro leads you to a composition of symphonic death metal combined with harsh growlings and tempo changes which allows the song to show a lot of variety. The same variety you have in the lyrics, some songs are in English and some in their mother tongue German. As Bavarians there must be a song about drinking and with the next song “Tränk dein Herz” Varus is showing more folk influences, lyrically emptying some barrels of the exquisite stuff. The title track “A new dawn” is again showing the full specte of epicness, clever used symphonic harmonies combined with death metal, choral parts, female operatical accompaniment, slower episodes and and a punch of harsh growlings. The very hard performed song “Ascheregen” leads me to my personal highlight of this release “Ein Lebewohl”, taking his time which is necessary to unfold itself with nearly poetic lyrics and the use of flutes and an melancholic ending solo piano performance. The following track “Wandel der Zeit” perfectly fits into the arrangement of the tracklist and is scoring with heavy guitar riffs. The lyrics are changing back to English with the song “The Ministrels Chant”, which perfectly combines growls with a chanting refrain and the use of accustic guitars and flutes as folk influences. The last track ” Die letzte Schenke ” is the second drinking song which should not be missed at any Folk Metal Party. With 8 tracks and a total running time of 46 minutes Varus is bringing us a very solid release with a variety of styles and harmonies. I would recommend this record to all fans of bands like Crimfall, Blodiga Skald, Ensiferum and of course their fellows of Munarheim. “Grüße aus Wien an Bambärch und weiter so, Daumen hoch!” “Greetings from Vienna to Bamberg and continue like this, thumps up!