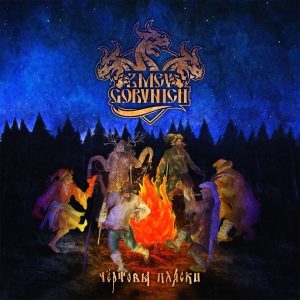 Even before the nightmare that 2020 had begun, I had a working list of my most anticipated/top albums already in the works. A 2nd album from Zmey Gorynich was at the top of both of these lists since they were teasing us with some singles to tide us over. Now the album has dropped once again on the mighty Soundage and is titled “Chortovy Plyaski” which translates to “Devilish Dances”….yes check out the cover and it seems right on. The album has 12 tracks at a blistering 38 minutes including 2 cover tracks so 10 originals. Their debut album “Mother Russia” I would say was an easy winner for debut album of 2018 for me and the album cover is still the screensaver on my phone so needless to say I was beyond stoked for new music. “Devilish Dances” does not disappoint in a sophomore effort with more of the “Lubok-core” style they have cultivated plus adding some additional elements. What is “Lubok-core”? I guess I would say a blend of Russian traditional, contemporary up-tempo folk metal with some other metal sub genres. Whatever it is, it works for me on too many levels to count. After 1 listen I was pretty convinced that this was even better than “Mother Russia” and that is saying something. I do feel that while not being as out of control as “Mother…” the tracks are equally catchy and more refined with more diversity. I guess a comparison to Trollfest and Rogatiy Kolokol are maybe the 2 closest bands for reference with ZG falling somewhere in between, bridging the not so serious with the brutal. The lyrics are in Russian (with the exception of the cover tracks) which works with the tradeoff vocals of Mityay and Rys……rough, brutal and in your face balanced with the ethereal, angelic and playful. The experimentation of styles is really what makes this super enjoyable…..the tempos and time signatures are very unpredictable with tracks sounding like the soundtrack to the weirdest dream you’ve ever had…. even going super slow at points. However, speed is still their specialty and they don’t disappoint with guitar, bass and drums setting new land speed records. The folk instrumentation is still extremely prevalent and varied from what I would say is accordion to whistles and stringed instruments (all I am assuming are keyboard generated but who cares?). The cover tracks are off the beaten path and I would think strange choices but again, they make it sound like they wrote them. “Voodoo People” (retitled as “Wonder People”) by Prodigy and “Dance On The Floor” By Jennifer Lopez and Pitbull are 2 super covers to close the album out. I really couldn’t find 1 wrong thing with this album including a gnashing, in your face mix that really puts it over the top. I certainly hope that Finntroll, Falconer and a few others bring their “A” game this year to try and topple this from the top of the mountain. While I feel that they probably have an acquired taste and may stray too far from “traditional” folk metal, Zmey Gorynich check all the boxes for me when it comes to balancing old with new, heavy and fast, catchy and memorable and most of all unique and ground breaking.