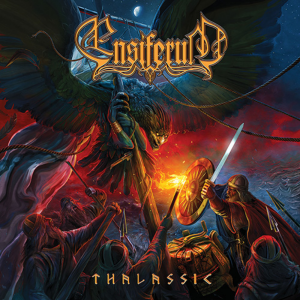 Ensiferum-”Thalassic” (8.5)
Every band has eras in their existence, and I feel that most will draw lines of separation in Ensiferum’s timeline. Is it Emmi or post-Emmi? Is it Jari or Petri era? Or maybe early albums or Metal Blade albums? Whatever it is there still is no question that they are still in the conversation in top folk metal related acts. With a new album looming in “Thalassic” the controversy of another new era in their storied history I am sure will start. Featuring 9 new tracks at almost 44 minutes, the album was issued via Metal Blade with an alternate version featuring 2 additional bonus tracks (“Merille Lahteva” and “I’ll Stay by Your Side”) which we did not receive. This “new” era sees the stellar Netta Skog leaving and being replaced with Pekka Montin, known for his work in Judas Avenger as clean vocalist and is also now the keyboardist, departing from their recognizable accordion sound. Just from that alone you can assume that the overall sound has changed, and it has to a certain extent. While there are some of the classic Ensiferum elements and I think most would say a return to form of earlier works, overall, I would say they are leaning more towards a power metal sound maybe akin to Sabaton at times. Don’t fret as the folk metal is still present but maybe less up front with a more guitar/bass/drums/vocals effort. Tracks like “Andromeda”, “For Sirens” and “Midsummer Magic” seem to transport you back to the old days in more familiar stylings. The remainder of the album has a different vibe but blended in with the more well-known makes them less different and flow together, bridging the gap. Pekka immediately reminds me of classic Helloween era Michael Kiske, hitting those high notes that are a staple of power metal bands. Overall, I like the album, but it isn’t blowing me away either. After hearing albums like the latest Zmey Gorynich, Lor, Ruadh and XIV Dark Centuries “Thalassic” is a good effort, but it probably won’t displace any of these in my rotation of “go back and listen to again” albums. One thing that is a huge plus is the sound which has probably the best of any folk metal related releases from Metal Blade (including acts like Amon Amarth, TYR, Primordial, etc) thanks to Janne Joutsenniemi’s work at production which definitely does have a classic era sound. I don’t think Ensiferum really has ever released a bad album, but the amazing album has eluded them for the last few releases. A solid effort? Definitely. Top ten for 2020? Unlikely. I’m sure you have already purchased it so my opinion is moot but if you haven’t, I think you can grab a copy and draw your own conclusions…..there still is enjoyable material here and a worthwhile listen from one of the most important names in folk metal.