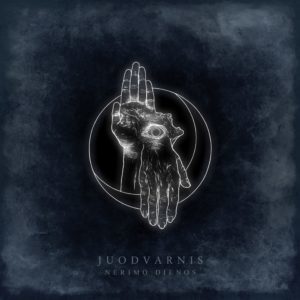 Lithuania has not been known as a huge exporter of folk metal acts until more recently with killer efforts from the like of Ukanose and Romuvos. With a new album on the horizon once again, Juodvarnis will be in the mix as far as top 3 acts from there. “Nerimo Dienos” (“Days Of Disquiet”) is set for a late August release date with 9 tracks at just under an hour of tunes. With this being their 3rd album and the last being reviewed by me and being super solid (2016’s “Mirusio Žmogaus Kelionė” (“The Deceased Man’s Journey”)) expectations were high for the new one and they have knocked it out of the proverbial park. Let’s start by once again saying I would not really consider this folk metal…..pagan metal? Maybe. What is it then? Somewhere between progressive and black metal with 3 acts coming to mind……Behemoth, Mastodon and most relevant, more recent releases from Enslaved. I can maybe even say Skalmold or Solstafir at points were jumping into my thoughts. Not bad company to be in at all. By all appearances the band is a 3 piece now and I think you will be astounded at the amount of music they can churn out and I wonder how these will sound in a live setting. The tracks range between 5 and 9 minutes with mostly up tempo and blast beats driving them. There are tons of twists and turns along the way and again while I would say this is progressive in nature, the over complexity that sometimes appears in most PM releases never happens here. Instead the riffing, tempos and vocal patterns are easy to grasp while still being super layered and though provoking. Even when the interlude parts in tracks like single “Sielos Dugne” (“In the Depth Of The Soul”) arise they never lose the energy but help tell the story more intensely. On the subject of vocals, the lyrics are in Lithuanian and range between a death howl and choral cleans (this aspect is probably what reminds me of Enslaved the most) which all work extremely well. I am a big fan of “Tik Dulkes” (Only Dust) if I had to pick out a favorite track but all the tracks here are stellar. I also really like the overall mix and sound with tons of bite and a smooth overall listening experience while still being heavy. Juodvarnis may be getting way too big for our little site and could really hit a much wider audience. 2 or 3 listens will really put you in the right mindset to grasp the album in its entirety as it really has a lot going on. “Nerimo Dienos” is a very thoughtful, meticulous album that has numerous sounds to reel in multiple metal fans. A great listen.