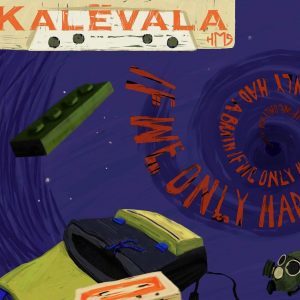 Subjectively, If We Only had a Brain by Kalevala hms rocks as hard as Disney soundtracks (a direct musical influence based on their choice of covers), and have the same relationship to folk music as self-styled bohemians that earn upwards of triple the income of the artists they imitate. But all outspoken opinions aside, what does the latest effort by Kalevala hms have to offer? Apparently, quite a lot of potential, decent wit, and the odd moment of avante-garde songwriting that hipsters will adore.

Clearly, the band has a special place in their hearts for Jethro Tull. Of the first two tracks, the meat of the riffs sound as if they were lifted directly from Jethro Tull, with the opener “Song to Sing in Case of the Apocalypse” comprising the folk era of Tull, and “Victory is for Suckers” being the progressive era of Tull. With regard to the flutes it would be easier to count the songs where they aren’t direct paraphrases of classic rock songs. One such song that comes to mind being the third track “Dumbo alla parata nera”, which without looking at the lyrics, is identical musically to a Disney soundtrack (three songs down more than ten to go). There is nothing wrong with taking inspiration from another band. While there are many Metal acts that recycle riffs there is a point where the inspiration begins to cull of creativity. Look at Blood Ceremony’s JT influences for an example of what moderation looks like with regards to musical influences. Or for a more tame example of what the more extreme side of the spectrum looks like, take some of the more by-the-numbers Thrash revival bands. Kalevala hms does however, seem to put a creative spin on that which they reap.

“Mickey Finn” and “If We Only had a Brain”, while both borrowing extensively from the pop culture they reference have one redeeming quality, which is humor. Social commentary is a strong point of this album and makes the movie shout-outs more tolerable by virtue of having an actual message about the state of society. While I was expecting some more “borrowing” from Martin Walkyier because of their approach to songwriting, I was quite surprised to see that the extent of the Skyclad influences went no further than harmless inspiration. While there are some weak points in the lyrics like the underdeveloped, “For the old world”, it feels like the issues they cover are self-evident enough to justify the lack of extant commentary. One other advantage is that there is no risk of the album sounding preachy when the humor is subtle, and the more melancholy messages keep to one or two lines. The other great strength of this album is that Kalevala lacks a formula of their own, and opt to tailor songs to a message on a case by case basis, which is lost in a lot of Metal sub-genres. Unfortunately, however, where there is good there is also bad. Their approach is conducive to filler like “Root Radioed” or oddballs like “No cheese = Blue cheese”. But with the album being consistent otherwise, they do little damage to the overall experience of the album. Overall, while their music may be an amalgamation of pop-culture and folk rock, Kalevala hms ploughs onwards in their own direction, gives no concessions, and clearly do not fear criticism; a fairly Metal attitude as far as it goes. Either that or they just really like Disney. Still, from the vintage tunes to the artsy cover art, If we Only had a Brain clearly knows its demographic, yet is worth a listen by others even if only for the humor and the classic rock nostalgia.