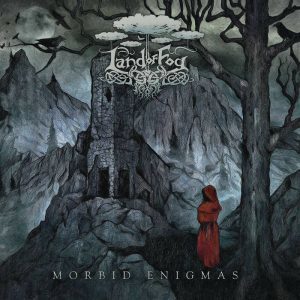 In order to understand what listening to Morbid Enigmas is like, imagine Epic Black Metal like Numenor, give that sound a more abrasive, harsh edge, and then add in some of the rawness the Black Metal genre typically prizes. Then you might get close to the Land of Fog’s on their newest album. Still no one sentence description can do a band’s sound justice. So let us examine some of the nuances of this album.

While I compared Land of Fog to a Epic Black Metal band, (that now arguably plays more power metal), there is a good reason for this comparison. Land of Fog maintains an indisputable Black Metal approach, with blazing riffs and relentless drumming. However, there is one aspect that sets them apart from other so called Epic Black Metal bands, and that is melody. Unlike the other bands who refer to themselves as Epic BM, Land of Fog does not water down the sheer aggression of the Black Metal with their melodies. Rather, the melodies enhance it. On the opening track the first thing listeners are treated to, is a slurry of blasts from the drums and the same looped chord progression that has an extremely powerful and energetic feel. This strategy is repeated throughout the song as well on other songs, particularly on “Collapse of the Idols” and “Wall of Iron”. Such repetitive chord progressions could sound monotonous very easily, but because of the delivery it simply doesn’t. They manage enough enough changes at just the right times to make sure that even with the extra energy, it doesn’t wear on the listener. But more than just the instrumentals, the vocals deserve attention to.
Traces of that very raw sound that characterized underground BM bands can be detected in the vocals across the album, and surprisingly it does not seem dissonant at any point. In fact, makes the music sound a bit more abhorrently evil. While discussing creative contrasts, the folk instrumentation and keyboards are noteworthy as well.

Unsurprisingly, the flutes pop up only when they have to, and when they do they always enhance the music. Their melancholy piping on the third track, “On Death’s Winds” strikes a beautiful contrast with the otherwise epic and slightly uplifting riffs. On “Serenity of Madness” the flutes have a different effect of producing a wailing keen with the other instruments which blends well with the atmosphere and tone of the song. The keyboards are used similarly on the track “Principled” which is the only place where they’re heavily featured.

Overall, Morbid Enigmas is an album grounded safely within the orthodoxy of Black Metal while having some outside influences. It hearkens back to the very first releases of Folk Metal where bands of various genres experimented with folk instrumentation outside of the norm. For a second album released eight years after a debut, this quality is exceptional as many other bands take a while to figure out what works. I would recommend to any fan of pagan back or epic black metal with an ear for melody.