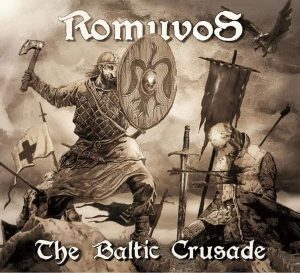 Last week on Friday I was quite surprised to receive the notification/recommendation via Spotify that the baltic folk metal band Romuvos just released their third album “The Baltic Crusade” via Dangus Productions. To be honest till that moment I only knew the bands name and had not been to familiar with their releases. Right after I hit the play bottom this changed rapidly, as I was really overwhelmed by the music and the next stop had been on bandcamp to immedialtey order the physical releases for my collection. It happens very seldom that a release can convince me within a wink, but it was clear for me that I surely missed out on something in the past, so it was time to catch up. What had began as a one man band of Velnias with his debut “Romuvan Dainas” in 2014 has developed since 2019 to five headed band. The roots of Romuvos lays in Lithuania while their current orgin is mentioned as Berlin in Germany. Their third release “The Balic Crusade” is a pure concept album with a historical background, bringing us back into the time, in which the “Rumova-movement” tried to defense their pagan believes against the christian invaders. Till today the “Romuva movement” is alive and in 2011 (last offical status) the Rumuva counted in Lithuania more then 5000 people and belongs to one of the offical faiths of the country. In 1387 the christianization of Lithuania took place and the Romuva are still referring today to the pre-1387 baltic paganism. All 9 songs of this new release are marked with yearly dates, which represent historical battles of the Romuva against the christianization of the country, which as we know today had been lost in 1387. We receive here pure Baltic Folk Metal with clear vocals and I can only refer to the reviewers of the first two releases, that the vocals strongly remind me on the early “Tyr” years. The clever use of traditional folk instruments (either brought via the keyboard or traditonally via percussions, accoustic guitar or melodica ) and the use of chants is giving the harmonies an special epic touch. All songs are coming slow or in mid-tempo with a high attention to floating folky atmospheres and melodies telling us stories of the past. For me the release has no weakness at all and as a piece of advise I would recommend already the first track “Saule(1236)”, which will most properly drag you into this great band. In my opinion Romuvos is one of the most underrated folk metal bands these days and actually they belong up to the big stages.