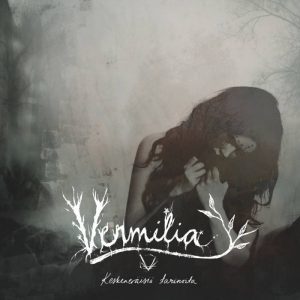 What does Mrykur (DK), Perchta (AT) and Vermilia (FI)​ have in common ?All three of them are very strong women who base their music on themes as nature, myths and paganism using atmospheric black (pagan) metal​ as main influence in their music.​ Furthermore all three of them have released very strong​ albums​ in 2020.​Vermilia understands herself as Scandinavian Pagan Metal Artist​ based in Finnland and she is active since 2017, having released already a​ number of singles and​ a full lenght album “Kätkyt” in 2018. With “Keskeneräisiä Tarinoita” Vermilia is bringing us another EP with four new songs and a playing time of around 22 minutes. The first track “Hauras, Kuollut, Kaunis” is​ creating a lot of atmosphere with a​ melancholic accustic guitar melody and beautiful clean female vocals.​ This track​ does not include any metal parts and is​ building up a very mythical soundscape with some folky touch.​ The next track​ “Taivas hiljaa huutaa”​ is hitting of with atmospheric black pagan​ metal​ and a very melodic catchy tune.​ The vocals are kept clean for a long while and growlings are only used selectivly to support the dark harmony of the composition. For me it is the strongest song of the EP and I could listen​ to it over and over again. The album is continuing with the title song “Keskeneräisiä Tarinoita”, which​ comes quite slow and again very melancholic and dark. The strong vocals of Vermilia are​ giving this title a quite invoking character. The last track “Pimeä polku”​ is the hardest track​ in all aspects.​ Pure Atmospheric Black Metal mixed​ with harsh female​ growls.​ Vermilia is showing us a lot variation on this short release starting from an accoustic​ folky​ piece up to the pure atmospheric black metal. Personally I​ prefer the combination of both styles, which would be reflected​ the best in the second song “Taivas hiljaa huutaa”.​ ​ ​ ​