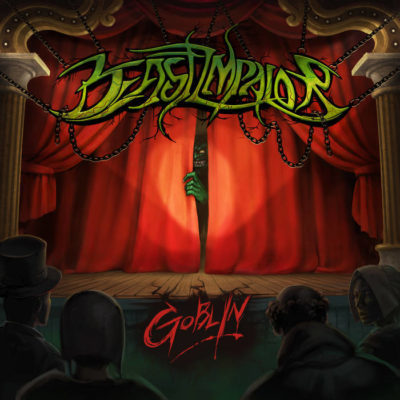 There are a ton of killer acts from Australia and I would rank Trollgasm as one of my all-time favs from any land. Since their too early retirement, which down under act will be taking the folk metal helm? I think Beast Impalor has the potential to be that band. Formed back in 2011, this tribe from Canberra first came on my radar when I heard a track from them on a still epic compilation with all Aussie acts (2015’s “Tales From The Southern Realm”) Since that time there hasn’t been anything (or before that for that matter) as their releases have been limited to singles and demos. 2020 finally sees a proper EP from them called simply “Goblin” released officially independently on July 31st via Bandcamp. The release features 4 tracks (intro instrumental plus 3) totaling just under 20 minutes. I could say that this could really be an extended single, but I won’t start with any nitpicking just yet. So, what does this offer? Something unique not done often in this being a concept style EP (Ukraine’s Gjallarhorn release “The Black Tower” comes to mind as the only other one). The title should be a giveaway….”Goblin” I believe features an introduction of sorts of their main theme/idea as a possible springboard for future releases. By name alone you could start forming ideas of their style and upon hearing it you would be very surprised. Bands like Finntroll, Trollfest and of course Trollgasm all are very good comparative acts and not maybe death metal acts as you may think. I think some of those off kilter black metal connected acts like classic Covenant or Arcturus could be in the conversation as well. The tracks are 4 to 8 minutes in length (I’m not counting the intro which isn’t really a track) and are super maniacal and tight…..I guess the 8 plus years to this point was certainly worth the wait. There is a certain familiarity to their style which helps to get into it but also enough differentiation to make them one of a kind. While most folk metal acts take the keyboard and make it sound like something else entirely (folk instrumentation), the keys here are used in more versatile ways and make for a larger variety of sounds from the sideshow calliope to the symphonic. The guitar bass and drums are spot on with synergy from the fast parts to the multiple stops and plentiful riffs. Vocally, the raspy and brooding screech really works and not that I’m some English lyrics purist, but it is certainly nice to really be able to understand the lyrics and sing along. I love the overall mix and sound with a heaviness in all aspects like a gut punch and the 20 minutes makes for a quick and enjoyable listen. Worst part of this? It’s only 20 minutes and I definitely want more already, and I think a future release could really mix it up with song lengths, concept and quirkiness. We still have a few months to go until the end of the year lists but I can safely say this will definitely be a top 5 EP for me without a doubt.