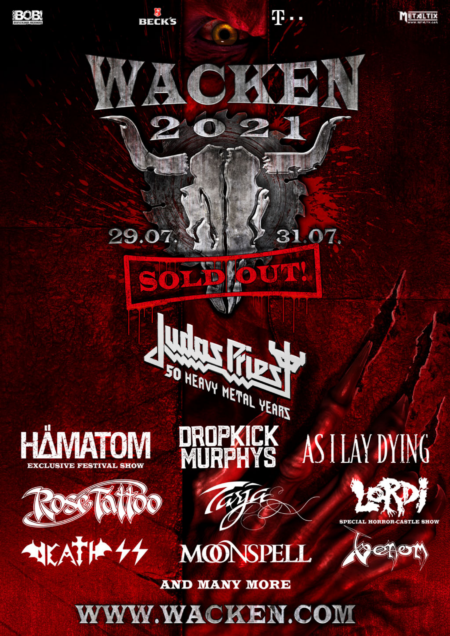 All​ 75,000 tickets​ for​ W:O:A 2021, which will take place from​ July 29 to 31 2021, have already been sold! The organizers have now announced the first bands on the festival line-up! Metal fans can look forward to:​ Judas Priest, Hämatom, Dropkick Murphys, As I Lay Dying, Rose Tattoo, Tarja, Lordi, Death SS, Venom​ and​ Moonspell.
​
This years Wacken Open Air couldn‘t take place due to the current pandemic. Although it’s much more quiet in the small village Wacken in​ ​ Schleswig-Holstein, the tradition announcing bands for the upcoming edition during the last festival day still remains!​
​
With legendary​ Judas Priest, who will catch up on their “50 Heavy Metal Years” show, Irish Folk-Punks​ Dropkick Murphys,​ As I Lay Dying​ with top-class Metalcore, singer supreme​ Tarja​ and the black metal godfathers​ Venom​ can be unveiled with the first announcement and mark five acts that were already confirmed and eagerly awaited for 2020. The new announcements are complemented by five fan favorites such as​ Hämatom​ with their only festival show in 2021, Australian hard rock veterans​ Rose Tattoo​ and the dark metal masters​ Moonspell.​ Lordi​ have come up with a “Special Horror Castle Show” and thus fit even better with the annual festival motto “Horror” than they already did before! The Italian occult metallers​ Death SS​ form the end of this first band wave and also skillfully join the new motto.​

“We are truly grateful for our fans trust they had given us – without even knowing about our line-up plans! Therefore we hope that they are as happy as we are about the first announcements for 2021. We are still in contact with many bands that were planned for this year, as well as have a few surprises for you, that we will unveil in the upcoming months,”​ explains W:O:A festival co-founder​ Holger Hübner.