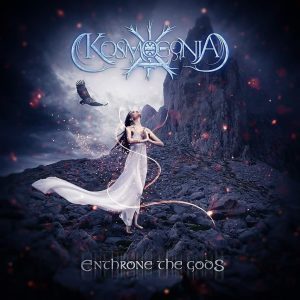 This is the Freshman release of Kosmogonia, entitled Enthrone the Gods. A little about Kosmogonia, they are a band from Greece and as I said this is their first release on the market.
As you would expect from a new band’s first album it is a little bit of everything, which I feel gives it a little bit of a lack of identity. The music is great when it’s good but things become
slightly repetitive with the very formulaic way they went about this album. Not to say that’s a bad thing, as it works in favor of the album and my few gripes weren’t enough to stop me from
enjoying this album.
Let me say if you are not a fan of harsh vocals, this will not be an album for you as Kosmogonia is a “Folk-Melodic Death Metal” band and even though it has clean vocals sewn throughout the
album, a vast majority of the vocals are unclean. All of the songs in this album are backed by a flute track which ends up usually getting lost in the music as it goes on. Sadly most tracks sound
like it’s the same chords that the flute is playing and gets a little bit repetitive throughout the album. Another of my concerns with the album is the female vocalist. While I enjoy operatic
singing, the singing of this woman doesn’t fit the tone of about half the songs on the album, mainly the first half of the album. At about track four, Raven’s Call, the female singer feels more
fleshed out and finds her identity in the album, which continues for the rest of the album with minimal hit and misses. For the most part the album has only the flute playing in the background
along with the guitars, but in the song Triiris it has a piano score which really does break the monotony of the formula they built with this album.
Now with all of that said I have to say I enjoyed the Greek mythology aspect of this album. I’m not all that familiar with Greek mythology, but I did know enough to get a few of the references
done in the song and I feel that it’s well done. My favorite song in the album was Daughter of Zeus, which is one of the two slower songs to the album. The flute in this song has an identity of
its own and compliments the beautiful voice of the singer perfectly. All together this album has an identity crisis which does dock some points from it, but it seems to pull itself together with
each next song until the final song Pandora’s Fall, wraps up the album together with a neat little bow on top.