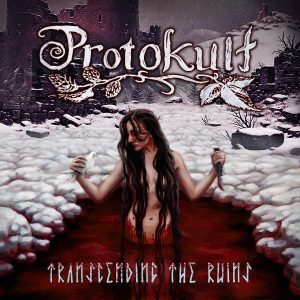 Protokult’s Transcending the Ruins has the makings of a fantastic album, and in many ways it is just that. There are however, one or two musical tendencies that pop up across the album which, while they improve song quality on paper, can clearly fall flat in practice. In that sense the main strength of the album is a double-edged sword. So the first component of this album that needs to be looked at is the songwriting.
With so many bands [debatably] tied down by or at least heavily influenced by their respective genres, Protokult stands among those bands who releases albums where the concept or the theme determines the stylistic approach of a respective song. Take for example the opener, “Mark of the Thunder”, a heathen themed melodeath song which leans more towards Unleash the Archers’s style than Amon Amarth’s style. Despite the melodic guitars there is a crushing rhythm and the bass strikes like a hammer on hot steel. While emphasized bass isn’t complex, the way it blends with the pounding drums suggests thunder, war drums, all the primal associations the name evokes. Compare that approach to next song “Feed Your Demons”, which has the same sweeping melodic guitars but is faster, more aggressive, and harsher both vocally and musically. There is even a point where the spoken word backing changes pitch and adds the wah echo used in so many horror movies. “Rusalka” picks up a more Eastern folk style, and “Valley of Thorns” has a paraphrase from classical music. It is self-evident that Protocult is more than willing to embellish their music. This however becomes an issue at a few points.
With deviations from style even within songs there are some times where the music slows down or simply feels a little out of place. “Wenches” is one such song. Overall it seems to go for the same bar-room feel as “Slainte Mhaith” or at least, it sounds like the kind of parlor folk music that one would hear at a Steampunk festival or Renaissance fair. But even though there’s nothing wrong with the message of the song, or the music itself, the singsong spoken folksy intro is a bit dissonant in comparison to the smooth transition on the aforementioned “Slainte Mhaith”. Additionally, “Rusalka” and its lead-in feel out of place on the album, though the songs themselves are alright. There’s also a tendency for some parts to drag on the slower songs, for example “Greet the Dawn” is not bad or repetitive. The fact that the song is slower means it’s more difficult to keep the listener’s attention considering that a blazing pace was the norm on the preceding songs. This is also an issue to a lesser extent on songs like “Rusalka” which is already the odd one out.
Overall Transcending the Ruins is an album with a lot of potential, and many of the issues on the album described here may also be what attracts people to the album in the first place. I will definitely say for all who want to see a band that is unafraid of exploring some new musical territory and tailor their songs to theme, this album should be an especially good pick. There’s definitely some appeal on this album for fans of Melodic Death Metal bands from North America like Aether Realm or Unleash the Archers. There’s an overarching similarity in the innovative mentality on this album that fans of those bands could appreciate.