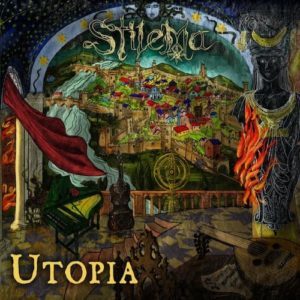 Stilema out of Ladispoli (Rome)​ is already active since 2004 and started as an accoustic folk band which recorded at that time​ a 6 six track demo, before they changed their name (formally Stilema XXI ) and released a more folk rock orientated EP called 2:3 in 2009. After a long time of inactivity they changed to folk metal and released their second EP Ithaka in 2017. After a band history of almost 16 years​ Stilema finally signed at Hellbone Records and just released their first full length album called “Utopia” on the 24.07.2020. While a lot of bands are mixing different genres as melodic death or black metal with folk elements it is already clear at the beginning​ of this record that Stilema found it’s own place, never forgetting their roots and the folk elements are playing the​ essential role in their music. Especially the great interaction of the violin and the metal parts are creating a very unique folky atmosphere. While the violin is played live by Wiktoria​ the keyboard (Frenk) is additionally supporting this atmosphere with some epic and partly nearly symphonic​ elements.​ The lyrics are in Italian language and the lead vocals are kept clean, while they​ partly receive​ support of harsh growlings backings and clean female parts. It’s really to say that the lead vocalist Gianni has a very special voice-colour, which is meant in a very positive way. Stilema is playing a lot with tempo changes and partly nearly accoustic episodes in their songs, which give all instruments enough room to show their talent. In general the songs could not be more folk metal as they are, but in some phases they also remind a little bit on Medieval Folk Rock. As sample tip I would recommend the songs “Il volo eterno” and “Ophelia”, which count to my favorite ones. Alternativley you can also check the title track “Utopia”, which comes as a 8 minute long composion, showing all variations of Stilema. With 9 songs (1 Interlude) and 42 minutes playing time Stilema is bringing us a very strong debut. It is just to hope that it is does not take another 16 years for the next album, as this band has a huge potential.​ ​ ​ ​