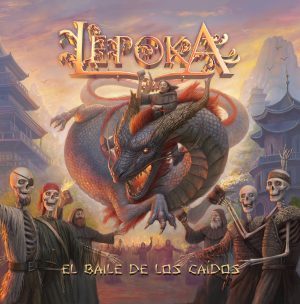 “Gritaré para aquellos que se niegan a ver: ¡que seguimos, seguimos, seguimos en pie! ” English Translation “I will scream for those who refuse to see: ¡That we continue, we continue, we continue standing! ” The first verse of Lepoka’s fourth full length album “El baile de los Caidos” is already saying everything. Lepoka is back and indeed they continue to perform their interpretation of folk metal on the highest possible level. This time the 7 musicians out of Castellón de la Plana (Valencian Community) created their first concept album which invites you to an adventure in two acts. However due my Spanish is very limited I can’t really help you out with the story behind the songs. The only thing which is clear is that you once again you can’t get packed more folk and metal into one album. It is nearly impossible to discribe their style, as they really give a shit about any conventions or limitations. In the first track “Seguimos en pie” you nearly have SKA influences, “Eternia” impresses with catchy celtic tunes and in  “La huella del dragon” you find yourself in Far East Asia. Take all that influences, mix it with Speed Folk, Metal and an vocalist who is as speedy as the music, so no native spanish speaker can follow anymore. Beside all of this Lepoka additional shows with “En este sueno” that they are also good in making a slow ballad. I already follow Lepoka since their debut “Folkoholic Metal” in 2014 and it is really astonishing that Lepoka is constantly delivering every two years ( Beerseekers in 2016, Bibere Vivere in 2018 ) a folk metal bomb of an album, always keeping true to themselves, but never getting boring.At times of CoVid-19 I do not even want to think about what it would be to see Lepoka as a live band. It must be endless fun and hopefully there will be release concerts or a tour coming up in 2021. Once again, as every two years “Muchas Gracias Lepoka” for bringing a smile into my face, even under such a difficult situation we are all facing currently worldwide!