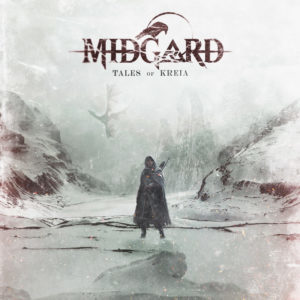 Tales of Kreia is the third full release by the Ukrainian 4 piece band Midgard. Hailing from Kaniv, Cherkasy Oblast, this troupe of troubadours are a folk/viking metal band that sing about wide range of topics including Vikings, fantasy, battle, death and rage. Unlike the other two albums, this is the first album that is set in a totally fantasy world. I felt that the album was a bit on the shorter side of album lengths coming in at 48 minutes, but this album was chocked full of the good stuff. Bagpipes, some lovely lady vocals, plus head smashing guitars and harsh vocals keeps your head banging for the full 48 minutes.

The opening track really sets the stage for what’s to come in the rest of the album. Starting off slow and melodic it soon crescendos into a fast paced track with some really head banging guitar riffs. Each song on this album has a little bit of a different thing to offer from melodic to thrash and death metal. So If you don’t like a track, just give another one a try, as it will offer something different from the last track.

Since this is a four piece each member plays a part with one person manning each instrument. Bass, guitar, drums and vocals, plus a variety of different traditional instruments scattered throughout the album. Klym Apalkov, the vocalist, covers both the harsher vocals and the clean singing, completely showing off the range this man has. Most bands have a man covering one of the styles, but not Midgard, so I have to give major props to this band for being so diverse and so proficient at what they do.

So now I’ll explain why I gave this album a 9 out of 10. This is a well put together album, with everything expertly put together and mastered that it felt like a story that I was being led through during the 48 minutes I was listening to it. Too bad I can’t understand Ukrainian because I would of loved to know what they were saying, and google wasn’t too much help, but I believe that is part of the fun of listening to a band in a foreign language is letting the raw emotion of the song guide you instead of the words.