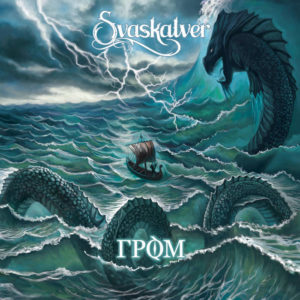 Even being “behind the scenes” to a certain extent in folk metal, I am still shocked when an album just seemingly drops from out of nowhere with no notice. Case in point, the 3rd full length from Russia’s Svaskalver entitled “Grom” (“Thunder”). Not a word about this release on Folk-metal.nl and even if you rely on Facebook for info, then you would notice there was no activity from them in 5 months and then all of the sudden, the album arrives with 10 tracks (8 originals and 2 covers) totaling almost 41 minutes. I reviewed their last release (2016’s “II”) and was impressed at how well rounded their sound is and “Grom” continues in that vein. Did you ever put on an album and know within a few minutes of listening that you were going to like it? “Grom” definitely is like that for me. I thought the opening title track was going to be yet another unnecessary instrumental but Svaskalver pulled a fast one and went right into a great beginning. The tracks range from 3 to 6 minutes and feature numerous folk instruments (both real and programmed) plus the added bonus of traded off primary female and male vocals. I would say countrymates Grai would be your best place for a comparison. While most acts from St. Petersburg (such as Svartby and Abracadabra) tend to be a little more out of control style wise, Svaskalver tend to stick to the middle of the road folk metal with some symphonic touches. Lyrics as always are in Russian which fits their style as opposed to switching to English to appease some fans which I don’t believe they need to do. So, a couple of items to chew on that I wouldn’t really consider negatives. There are 2 cover tracks here which close the album out….. “У шамана три руки” (“The Shaman Has Three Hands” by Picnic….hopefully an accurate translation) and Trivium’s “Silence In The Snow”. I don’t know if either of these really add anything to the album and I think stylistically they didn’t really make them super different than the originals. Also, the folk instrumentation (violin specifically) is not by current band members but by guest appearances which I hope will change to making them permanent members. I think the tracks are strong enough to survive without it if need be but would need to be programmed for live. Yes, I know I am stretching here with some nitpicky stuff which means that this album is super solid if these are the biggest complaints. I would say listen to the 8 main tracks, skip the covers and you would have 35 minutes of great folk metal.