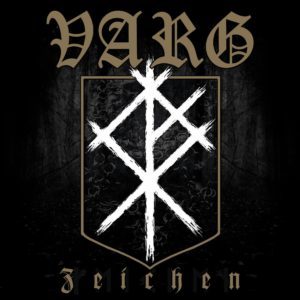 When I hear that a new album from Varg is needing a review, I usually have a little bit of trepidation on saying OK. Why? For most of their career I feel they have been inconsistent with releases… some good, some bad. However, since 2016’s “Das Ende Aller Lügen” their output has been all quality, including the reworking of their debut album into “Wolfszeit II” from last year. September 18th will see the dawning of another new album in “Zeichen” (I could see this translated as “Sign” or “Symbol”) with 10 new tracks totaling 41 minutes for their label, Napalm.  One thing you never know with Varg is what you are going to get, not only from a quality point of view but also stylistically and this may be the most pagan based album from them in a long time. More recent efforts have had a more deathcore or maybe even a thrashier vibe which have definitely worked, but “Zeichen” feels like a return to their roots.  From song titles alone, you should know where they are headed here (“793”, “Schildwall”…..) with a Viking centric release this time around. I believe there will be a lot of comparisons to Amon Amarth and it is certainly justified. From the riffing style to the vocal delivery there is something certainly very reminiscent of AA but of course there is enough Varg touches to make this their own. Lyrically, they are one of very few bands that can offer vocals in their native language (German) or English equally well with this time around having “Zeichen” being entirely in German. The track lengths are in the 3-4 minute range for the most part with one track (“Verrater”) clocking in at almost 8 minutes. “Zeichen” also features 3 new members to the Varg clan in new guitarists Morkai and Garm and female vocalist Fylgja. All 3 of them perform admirably well throughout the album but I don’t know if they have all been used to their potential especially Fylgja. When she does have significant vocals like in “Fara Til Ranar” the possibilities seem to be endless with what they can do now. The only thing that I have struggled with are vocalist Freki’s vocals here. I have had a hard time trying to figure out what is not resonating with me with his delivery here…is it too up front, too much self-harmonizing or too much effect on them? I’m not sure what it is but for some reason it just didn’t connect with me as his delivery on previous releases. That aside, the album overall is pretty decent and has a lot more positives than negatives and I’m sure will please many a Varg fan. Remember what I said about the inconsistency with their releases? This one could be considered a toss up but I would give it a definite better than most albums out there this year. A solid album once again from Varg.