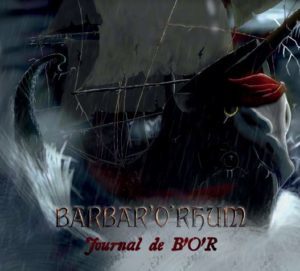 Barbar “O” Rhum are from Toulouse France. They are a pirate folk band and judging from this release they can play pretty much every instrument ever created. The album is filled with great individual performances on every type of string and key instrument you can think of along with whistles and even bagpipes. I’m sure they would be a big hit on the festival circuit since they seem very authentic and they can certainly jam. There are 10 tracks on the disc and they are mostly long jams that can be anything from the dirge like opener to long instrumentals. The songs are sprinkled with metal mixed with upbeat folk its pretty interesting, but sometimes a little long for my taste. I feel like some of the tracks could have been edited down and they would hit a little harder. All the lyrics are in French which is no problem at all as it makes the album much more authentic. However since I don’t understand the songs I’m sure they would hit harder for french speakers. Each track begins with ambient sounds that make you feel like your at sea I’m cool with it but some may find it a little cheesy. The more interesting tracks like “Birdy”and “Pirate des Champs” transport the listener to an exotic location and allow time for a vacation there but the weaker tracks seem like overlong stays at the in laws (,Fun at first but then you want to leave.) I enjoyed the album in small doses and the talent of the group is undisputed. I would love to see them live and I think with a little editing they have a great future. Favorite tracks for me the opener, Pirate des Champs, Birdy and Le Robin des Mers.