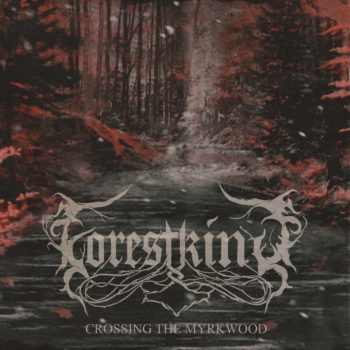 Way back in 2017, I reviewed the debut from Idaho, USA’s Forest KIng entitled “Lore Born”. It was (and still is) a solid Viking metal album and showed tons of promise. For the last 3 years it’s been quiet from this project until recently with the announcement of the follow up in “Crossing The Myrkwood” with two singles preceding the album with “Dying Light” and “Second Sight”. The album is an independent coming out officially October 13th with 9 tracks totaling about 36 minutes so a 4 minute per average. What makes Forest King great is a combination of a lot of familiar parts and not being so trapped in Viking metal as to not do some different things. Unlike many a Viking metal act with roots in black or even death metal, Forest King has a more traditional, thrash or on this album, even a groove and semi-progressive sound about them. There is still a black/death vibe, but the album has many tangents to it. Main member Tyler Haagenson has explored some new territory here (with fellow guest musicians Josh Rodriguez and Matt Lefebvre) and sees an advancement and differentiation in their sound. The tracks are a variety of tempos, styles and I would go even so far to say this may not even be Viking metal at all but maybe some as yet to be defined sub-genre. Whatever it is, it is something that I don’t think really anyone has heard before and that is saying something. If a comparison is necessary, then Helsott is the first band that comes to mind on some level…..there is definitely something American and Pagan about both. The tracks are not overly complicated despite me saying they are semi-progressive but the use of keys, stops and starts, layered guitars, vocal patterns and percussion choices all fit. Tracks like the title track and album closer and longest track here “The Nothing” are 2 of the bigger highlights amid a nice collection of tight tracks. The overall sound also has a unique feel about it….kind of muted/old school mix which works at creating a mood without losing the clarity of the music/vocals. I think you should keep an open mind when checking out “Crossing The Myrkwood” as it doesn’t check all of the boxes you may think it should, but it contains a lot more than you think it will. Good album.