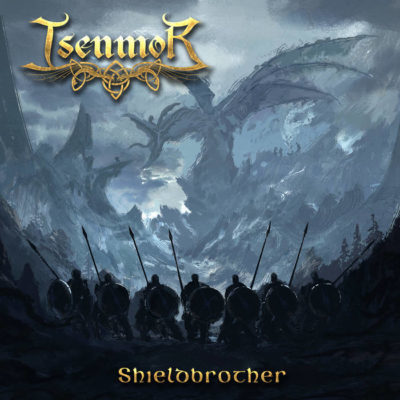 I would usually say for a band to be in existence for 5 plus years and only have a single and an EP to show for it would be disappointing. In the case of Baltimore’s Isenmor, they get a major pass since their releases have been of top quality. “Land Of The Setting Sun” may be one of my all-time favorite folk metal EP’s and has tided me over for years until this glorious era has arrived with their debut full length album entitled “Shieldbrother”. Set to be officially and independently released on October 9th, the album has 8 tracks totaling 47 minutes of all new tracks (although the booklet lists 9 tracks which would include 2016’s single “Saxon Shore” as a bonus track). They have released two singles so far (opening track “Battle Scarred” and “Furor Teutonicus”) and instantly I knew from these two offerings they have been putting in tons of time honing the new tunes to a sharpened edge. For those familiar with their previous work, I think you will be absolutely blown away at the final product and the progression between “Land….” to “Shieldbrother”. A possible indication would have been the aforementioned “Saxon Shore” single as a possible harbinger of what was to come, but even that couldn’t have prepared me for the epicness of the new album. So, let’s start with the basics….they now count 7 members in their ranks which could sound like a lot to contend with, but Isenmor have shown enough restraint in the tracks, and writing to allow everyone to have space.  The hallmark of their sound is a dual violin fueled attack interwoven between bass, guitar, keys, drums and multiple vocal styles. Looking for some comparable acts? How about a mix of Forefather, Ensiferum, Hammer Horde and Windfaerer? I would take that all day long for sure with that company to be in. A majority of the album features tracks in the 2-6 minute range and every track is packed with riffs and lyrics…..I would say you would be having sensory overload if the tracks were longer. I should have quit while I was ahead about being overwhelmed when they decide to unleash the monster album closer in 17-minute track “Sigurd’s Song”. Luckily, I was prepared to hear this, having the honor of them performing this at my festival a few years back (yes, you should have been there).  There is a little bit of everything on here for all from heavy to fast to folky to all points in between and with every listen I find something new to like. I don’t want to forget about the importance of making sure you really dive into the lyrics and the explanations of the tracks as it really helps make them that much better…..they have not fallen into the Viking trap but have carefully chosen Anglo-Saxon and Germanic inspirations and of course a little bit of drinking. It’s probably too early to call this a “classic” for the ages but it really has that feel of an album you have listened to hundreds of times in your life and always go back to. I love the mix/sound especially the vocals and violins being front and center but never drowning out all of the other incredible things going on. While I thought Poland’s Windmill had debut of the year wrapped up, “Shieldbrother” in one fell swoop has taken that spot over along with a very high position in the overall top albums of 2020 for me….move over Finntroll, Zmey Gorynich and Amiensus.  What is “American” folk metal? Raise the stars and stripes as this album is probably one of the finest examples to date and one that will stand the test of time….amazing album.