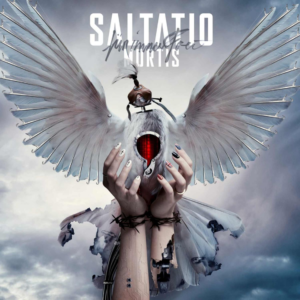 Spielleute is such a nice German word, in fact it says it all regarding to Saltatio Mortis. ‘Playing People’ would be some kind of English translation. Guys who don’t only make music, but where music runs through their vains. Not only does this band create Folk-rock albums, but they’re playing Medieval shows with basically percussion, bass and lots of bagpipes and shawms.
They’re very capable of giving old folksongs a new coat, but they’re just as good in writing new songs. And they have grown immensely in at that.
The band likes to cooperate with other bands, they recorded a Subway to Sally song for that band once, they’ve released an EP with besides their own version of their track ‘Wachstum über Alles’, the versions of three other bands. And they are always in to try something different, no matter if this are ‘advertising jingles’ at their concerts or flirting with other styles. They like to make lots of fun and last but surely not least, they have an opinion and they stand for it.

‘Für Immer Frei’ or Free for Always in English is the ultimate product of all the above things. This is another rock album by these musical heroes, the album is bursting out with rocksongs, but there’s more flirting with other styles on this one. Cross-over with rappers in ‘Mittelfinger Richting Zukunft’ feat.Swiss und dieAndern & Henning Wehland or punk in ‘Lienen im Sand’ they do it all and what’s more they stay true to themselves when importing these influences in their music. But they even put one of the Medieval tracks on this album as well. And they pull it off ‘Factus de Materia’ is an outsider on this album, but it’s certainly not out of place.
Their point of view on society are made clear as well, ‘Loki’ isn’t just a tale about this mythological figure, but a way to tell a story about fear for the unknown. There’s no freedom without danger. The freedom Loki gained with his escape from captivity leads to Ragnarok, the end of the world.
No freedom without danger is the main theme of this album, but in all it’s aspects. Without freedom there is no happiness and no hope. Against racism and nationalism. „Ich träum von einer Welt, in der Gerechtigkeit mehr als nur ein Wort ist und die Hautfarbe nicht von Belang“, (I’m dreaming of a world in which justice is more then a word and where the colour of your skin is not important) are their words in ‘Gebor’n um frei zu sein’ (Born to be free).

With their great musicianship they pull it off to create this album full of hits, it will certainly rule the German charts. It’s bizarre to see to which level they have developed by doing what they like to do.
Saltatio Mortis have reached the highest level in musicianship and there’s only one word that, they are: SPIELLEUTE!!!