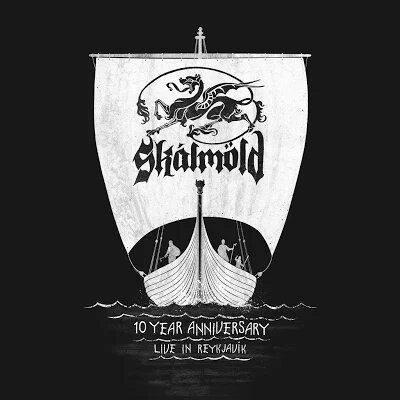 Skalmöld’s 10th anniversary effort Live in Reykjavik not only checks all the boxes for a great live album, with excellent fidelity to the studio releases, a good audience, and minimal filler but due to the wide range of Skalmöld material can also serve as a sort of best-of album that is of course, more of an overt gift to the fans than a regular compilation album can ever be.

First thing to discuss about Live in Reykjavik is how high the production value is for a live album. Unlike many live albums where some of the layering and embellishments of the music may be dropped for any number of reasons when played live, Skalmöld’s music on this release is almost always comparable to the studio albums. Some fans may of course have issues with the balance of instruments, but for this reviewer it’s interesting to hear some of the melodies pop out more with the way the live set-up works. The guitars have a nice full sound on most songs, and even the bass lines are clearly audible beneath the bold guitar tone, which is always a plus on live albums. But there are some drawbacks to this clear production. Don’t expect the cold brooding air on Sorgir’s tracks to be reproduced here, and also be ready for some of the subtleties of tone changing with the polished sound. But the instrumentation isn’t the only that’s been well oiled for this release, the crowd is another high point.

Generally audiences on live albums can show up in one of two ways. One is exemplified by the DragonForce live album released with Theart as vocalist, where the audience is mostly present between songs, and generally seems like they almost drop out of existence once the music starts. The other approach is exemplified by Blind Guardian’s aptly named Live, where the audience are active, sing along, cheer, and at some point even carry on with a song after the band finished. Now between those two poles, Skalmöld occupies a space much closer to the bards, and on Live in Reykjavik the audience participation is such that the audience at times add enough to the song that one gets the feeling they could stand in for the choirs. All the chanting interludes are enriched by their presence, and it must be said, this reviewer has never heard an audience boo with such vitriol when displeased with something they heard said between songs (all I’ve ever experienced at a show was one or two people shouting “no” or maybe one person boing well about a dozen says “boo”). With the emotion and fervor of the audience both between tracks and during several songs, it isn’t hard to see that this is where Skalmöld started off. With so many excellent interactions with the fans, the good production, and songs from across their back-catalogue, Skalmöld really devised something for the fans to enjoy as if they were in the room (though it may require big speakers and more than a little imagination). Overall Live in Reykjavik is a must have for fans of Skalmöld. As with many collections of songs from across catalogues, it could also serve as an introduction to the band, but this feels like it will be appreciated more by those who already heard the studio songs, since new listeners may not get a full feel for the nuances of Skalmöld studio releases. But regardless, this live album is a solid 10th anniversary release, and a fine live album to boot.