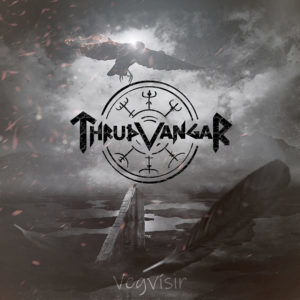 If you would have asked me in March 2020 what we could expect from this year in respect of Folk Metal I would had been quite reluctant to forecast anything. Nearly a half year later the situation looks quite differently. The year 2020 will definitley be a year of the comebacks of the German Pagan/Viking/Folk Metal scene, after 9 years  XIV Dark Centuries and Gernotshagen released their new albums and only recently we received the news that Thrudvangar will be back after 7 years with their 6th full length studio album called “Vegvisir”, which will be released on the 13.11.2020 via Trollzorn Records. Vegvisir is an Icelandic magical stave ( from the Northern Mythology ) intended to help the bearer to find their way through rough weather and storms even if the way is unknown. Basically the title of the album fully reflects the intention of the band not to lose their way and Thrudvangar is presenting us with this new album, as we are used from them, a typically strong Pagan Viking Death/Black Metal release. After a small atmospheric intro the album kicks off with harsh guitar riffs, growled vocals and all the songs reflect to the Nordic Mythology and Viking tales. From the beginning of Ragnarök (Wächter der Brücke), Jörmungandr, the Fenris wolf (Fenris Brut) over Hravnagud you basically nearly get which each song a lesson about the tales of the Edda and the life of the Vikings. Beside the last song “Alles was bleibt” all tracks are straight harsh Viking Metal songs partly accompanied with some Viking choirs or atmospheric backgrounds. On the last track Thrudvangar enters some new fields with a kind of Metal ballad with clear vocals, which everybody needs to decide for him/herself if it really fits to the this basically strong release. As recap the waiting time of 7 years was worth it, maybe Thrudvangar do not enter new fields, but keeping true to themselves and you get what you await: a very solid Viking Metal release!