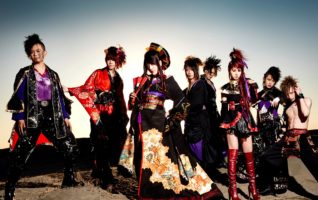 “Tokyo Singing” is about the power to overcome difficulties and adversity, the strength to never give up, and the courage to stand up over and over again, and is a message from WagakkiBand from here Tokyo to the world.

This is the lead track ‘Singing’.

All editions of the album CD include 12 tracks. Including “Ignite” from their 2019 Concept EP “React”, and an additional 11 new tracks. One of the new tracks is “Sakura Rising with Amy Lee of Evanescence”.

This album will be available in 5 forms.
The Shin Yaeryu edition comes as a special package put together in a BOX including WagakkiBand mini-figures made by the king of rock band figures “brokker”, and a full-size Blu-ray recording of the “WagakkiBand Japan Tour 2019 REACT -Shinshō- Final” at Yokosuka Arts Theater from last year.

The limited video edition (Blu-ray or DVD) includes all 16 tracks in full from the “Premium Symphonic Night Vol.2~Live&Orchestra~ in Osaka-Jo Hall” that was held on February this year.

The limited booklet edition includes “WagakkiBand Kaitai Shinsho”, a full volume booklet with a total of 144 pages made just for this album, produced by sub-culture magazine “Quick Japan”.

The CD Only edition includes an instrumental version of all tracks in disc 2.

In addition, the digital edition will include “Roki” by MikitoP as a bonus track, their first Vocaloid cover in a while.

For more information about the new album, check out the “TOKYO SINGING” special site:
https://sp.universal-music.co.jp/wagakkiband/tokyosinging/