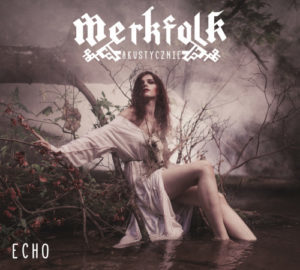 I have been writing for the site for quite a while now and remember way back in 2015 when Poland’s Merkfolk grabbed our top debut album of the year. I do not remember this being my personal choice, but democracy prevailed, and I did think it was pretty solid. The follow up in 2018 “Kolovrat” got a decent review but nothing close to the debut. 2020 sees them jumping into a full-length acoustic album entitled “Echo” featuring 15 tracks totaling over 50 minutes. I thought going back and listening to the 1st 2 albums was in order and they are definitely decent albums….so how would an acoustic album fair? There are a few bands that can do both extremely well (Grimner and Baldr Draumar top my list) and I can add Merkfolk to that list as well and I would go one step further and say I prefer the acoustic Merkfolk over the electric. The tracks are relatively short (1 ½ to less than 5 minutes) so quick, simple tracks but they all have something interesting to listen to. Officially they are a 6 piece with primary folk instrumentation being fiddle and accordion (although I hear some other things going on like flute) while vocally they have 2 female vocalists, who either go solo or harmonize together. Lyrics are in their native Polish and while not being familiar with the language, I do get the sense there is a lot of traditional lyrics and music going on here and if not, they really have tapped into it for inspiration. If you are looking for a comparative act, Grai is the one that comes to mind and maybe some of the acts from Slovenia in Zaria or Brezno. After a few listens I really appreciated the short tracks and the variety of styles on display from the slower dirgey ones to the upbeat ones. My only complaint would be maybe the album could be shorter….maybe a few less tracks would have given this a little more impact but that is just me. Good overall mix and sound help make this an easy to listen to album….very natural sound and no major tweaks that could have made this a mess. From a new fan point of view, I certainly would go back and check out the first albums before jumping into “Echo” just as a point of comparison and I think you will be able to decide which ”version” of Merkfolk you like more…for me it is the acoustic one. Good album.