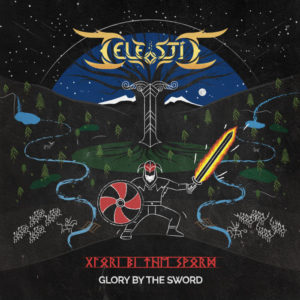 CelestiC out of Aix en Province in France is a one man project band from the Raphael, who just released on the 24.10.2020 its full length debut album “Glory to the Sword”. Even that we are talking here about a debut record CelestiC is already active since 2005 and had already made a lot of experience in releasing a demo in 2011, an EP in 2016 and two compilations with his “YouTube Covers” in 2018 and 2019.
In his early career he was more focused on Power Metal until with his actual release his style finally changed to Melodic Death Metal/Heroic Folk Metal.
Already with the first song “Frozen Blast” CelestiC is confirming that he is a full blood musician. For me it is always astonishing how one man projects can deliver such a good quality. After a short melodic interlude the song literally explodes into a “frozen blast”. As my colleagues already stated this is something for fans of “Wintersun” and I can really partly connect to that statement. The base of the music is very melodic death metal with some tempo changes, but always accompanied by very atmospheric and nearly symphonic arrangements. In respect of the vocals CelestiC is delivering us very harsh growlings and partly very high sung clean vocals, which I would interprete as a small influence of his “Power Metal past”, however those are used in a very clever way and bring more variety into each song. The lyrics basically serve all the expectations of a Viking/Pagan Metal fan. The biggest strenght of this release are the very strong guitar riffs combined with the great underlaying epic atmospheric harmonies.
Of course the cover art can be discussed as it comes quite simple. Personally I think it is not failing its aim and is just a different approach how to present an album. With “Glory to the Sword” comes another very solid debut album of the year 2020 and the only thing I need to disagree is, that it is not only for fans of Wintersun, but can reach a much wider audience. CelestiC took the step to release this album free of charge ( or name your price ) on bandcamp and I can only recommend everybody to lend a ear to this great debut!