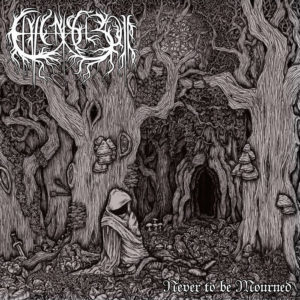 When listening to Elvenscroll’s latest release, one will find that true to the album’s name, there is nothing mournful about it. In fact, below the soaring melodies, there is a rather nuanced and incredibly expansive track-list on offer that holds up in face of one or two issues. Because Never to be Mourned is so short, this time around the review will cover the individual tracks.
“Relics” is a great opener, with an uplifting yet abrasive sound that offers heavy riffing and surprisingly subtle folk instrumentation. These traditional elements compliment the Metal rather than dominate it, and while the track can easily get monotonous if the listener isn’t invested in it, there is an incredible vigor to the music that makes up for the times when the riffs would otherwise repeat one too many times.
Continuing the high note, “Return to Valhalla” continues the dynamic songwriting with a heaviness to match lyrics paying tribute to departed warriors. The beat on this track leans more to that “hammer on the anvil” guitar and drum combination, and yes, the folk instrumentation once again serves to compliment the Metal, not the other way around.\
Sadly, while “Statue of the Goddess” may be a good song in its own right, with the previous two tracks being so good and with the song tightrope-walking between mellowness and being a straight power ballad, the track feels like a disappointment. The vocals are clean and resemble Bruce Dickinson’s more emotional tone on parts of Final Frontier. As mentioned earlier, the track is really smooth and languid, but it does get slightly more intense – not nearly to the same highs as earlier.
“Wayfarer’s Mourning” has a more epic feel to it, with more folk instrumentation which still takes a secondary role to the electrical instrumentation. It has decent pacing and the harsh vocals are slightly up-tempo from the music. Interestingly, “Relics” had rawer sounding growls while this track has more mid-range death growls that change up when they have to. One issue with the prominent folk elements is that the instrumentation sounds like it was done with a bad keyboard patch, which doesn’t distract, but affects immersion.
After an eerie little instrumental reminiscent of Finnish Folk Metal giants like Moonsorrow comes “Wild Hunt”. Wild Hunt changes things up completely, and brings the keyboards to the forefront with a spooky sounding intro where the guitars have a darker, more evil sound. Even the solo feels slightly down-tempo and has a melancholy sound to it. This song is more dynamic than any other song on the album and simply hammers the point home that Elvenscroll doesn’t write formulaic music.
What makes this EP stand out? It is one of those albums that clearly show that not all Folk Metal bands play happy folk music or focus more on the folk than the Metal, which is one criticism frequently made about the genre. Korpiklaani’s Kulkija is Folk metal and Elvenscroll’s Never to be Mourned is folk Metal. And as always it’s interesting to hear bands that don’t stick to a formula. As long as listeners can freeride with an album’s energy, and doesn’t mind iffy keyboard patches, this album is an essential of this year’s Folk Metal releases.