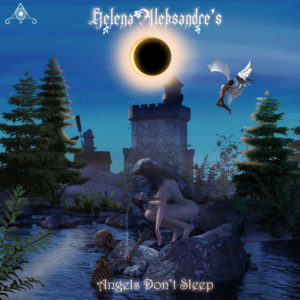 Helena Aleksandre’s is discribing themselves as Russian Progessive Folk Metal and Hard Rock​ artist who​ is presenting us with “Angels don’t sleep” their​ debut album, which had been released on the 24.11.2020 via Sliptrick Records. The release is combining a lot of music styles​ such as rock, hard rock and metal with a limited portion of folk influences. Beside of the use of the accustic guitar I can not really find any connection to Folk Rock/Metal, which does not make the album in any way​ less interesting. It is always great to listen to new music and see and feel the approaches of new artists in finding their own way. In that sense Helena Aleksandre did a very good job with​ the song writing in delivering us beautiful harmonies and melodies, which are mainly kept in a very slow tempo and are spicked with great epic guitar solos. Vera as vocalist is keeping the vocals clean and is proofing her skills as great singer from the beginning to the end. The lyrics are kept mainly in English, but the record also features two Russian songs. I also need to state that most properly the included two instrumental songs “Tears of Rain” and ” Polar Night” have the attempt to be folky. Nevertheless this very calm and piecefull compositions which are presented on this album could be for some folkers a nice variety to listen to during these cold authumn/winter days.​For our platform as reviewers of Folk Metal/Rock, Medieval Rock or Celtic/Speed​ Punk​ I would rather say that this album is​ “off-topic”. However the album is general quite good and for sure an enrichment for fans of slow driven Hard Rock/Metal including some accoustic guitar moments.​