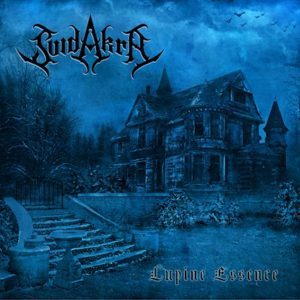 We all long to abandon the inevitable perceptions and scars of time that plunge us into a jaded existence, saturated with inescapable trauma or if we’re lucky, joy so very consequential in our every opinion and decision, forcing us into biases. So much so, we’re doomed to be distracted away from artists with illusive potential for that subjective alignment. Coupled with spitefully ironic and persistently fickle timing. Thus, an invitation to review and critique an unknown classic is a genuinely welcomed task. In fact, I’ve been craving a record such as Suidakra’s 1997 Lupine Essence immensely, in search of an old-school gem. It’s one I wouldn’t have loved in its infancy, and even still, Suidakra’s new material isn’t my ideal cup of Earl Grey Metal, for the sake of a critic’s particularity. But in this insane dumpster fire of a year, riddled among frivolous attempts at sanity, I feel pleasantly familiar with their essence in every track of this record. A cozy, comfortingly gritty transcendent, sentimental sound.

Who are Suidakra? To put simply, German melodic death/black metal with folk and Celtic elements touting over a dozen albums during a 23 year tenure, primarily led by Arkadius Antonik throughout.

Who said it’s pretentious to name a band after yourself?

In a recently popular and interesting twist, the band remastered and in many cases completely revamped their first ever release to reintroduce it this Friday, Nov 20th. And to be honest, I can get behind this old wave thrashy punk flex, as things start off innocently enough and quickly turn sinister. Specifically on Banshee the rhythm and vocals subdued at the start, pick up in unison just to unassumingly bring it all right back. Galloping straight into our fave Viking vintage on Dragon Tribe, sprinkled with random fem vocals, atmospheric keys and an extra hallow snare for good measure. I really like the melodies and thematic variety with a substantial and unforgotten bass. Heresy takes on a similar tone paired with an excellent black metal strum and without letting the mood stale, it’s sent into the first instrumental passage sung solely in an perennial high pitch over acoustic picking. This melancholy siesta is short lived as Havoc revitalizes the mood once again but a sudden inconsistency in Warpipes reminds me why I’m always partial to rocky clean vocals and post-battle ballads. Unrelate-able dissonance, however insufficient to sway from the enjoyability of the last strung intermission…And A Ministrel Left the Mourning Valley. Devoid of irony and aptly named, Internal Epidemic closes the original album out nicely. A collection of alternate versions follow, reminiscent of In Flames’ progression, of which Banshee truly shines and Warpipes is completely redeemed. These redos certainly address the intent clearer, noticeably evolved in all aspects.

In some ways, this compilation is an epitome of raw 90s Folkish Black Metal, new and improved with refined production, allowing for each instrumental aspect to finally shine. It’s not likely to sway me toward fandom, but it’s a nice listen!