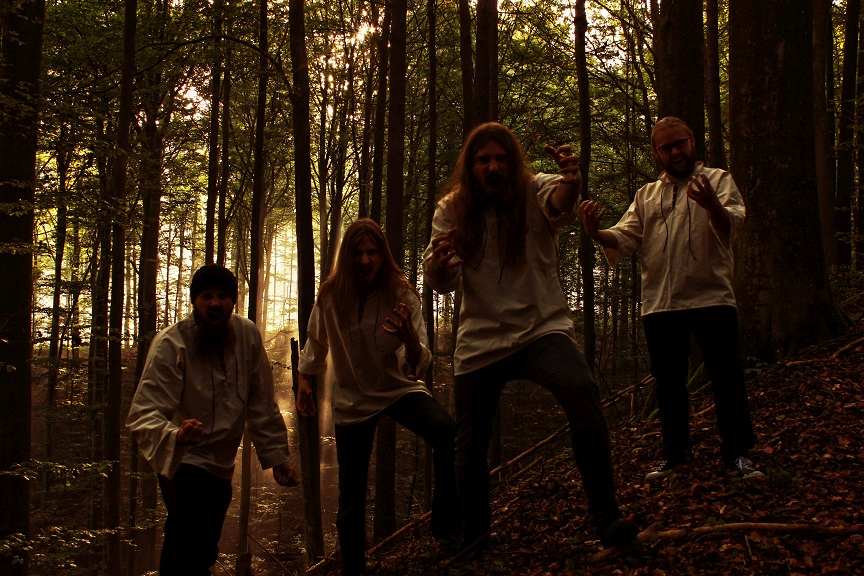 The Polish Folk pagan black metal group Varmia – who pay tribute to their Baltic roots by combining black metal sounds with traditional instruments such as the goat horn and the tagelharpa – has signed with M-Theory Audio. The band’s third album, “bal Lada,” will be released in Spring 2021. An early taste of the spirits soon to be summoned can be seen in this video showcasing the making of the album:

Varmia was formed in 2016 by vocalist/guitarist/composer Lasota with a mission of fusing black metal with musical influences that pay tribute to the ancient Baltic tribes of the historical Warmia region of northern Poland. On vocal duties, Varmia emits harsh growls that shroud the band’s music and native Polish lyrics in a visceral aura, the only breaks from this vocal assault occurring when using the traditional, ancient technique of “whitevoice” clean singing as utilized during ancient East-Central European rituals, rites of passage and festivals. Meanwhile, the power of the band’s metal influences are enhanced on “bal Lada” by traditional ethnic instrumentation of the Baltic Rites via sounds of tagelharpa, goat horn, wood tuba and krivula. The final result is a compelling mix of dark metallic sounds that channel the spirit of early Enslaved, Satyricon, and Wolves in the Throne Room and folk elements that drive acts such as Wardruna.

Varmia has released two albums to date – 2017’s “Z mar twych” and 2018’s “W ciele nie”. The group records all of their music in culturally significant remote locations throughout their native Poland, and “bal Lada” continues that practice, as the 11 tracks of ominous and atmospheric pagan black metal contained within were recorded in a makeshift studio set up by the band in an old 19th-century manor in Northern Poland, where they recorded while playing together as a live unit with no sound editing.

With the forthcoming release of “bal Lada,” M-Theory Audio is set to spread the band’s native sounds to a worldwide audience. Says Lasota, “With two releases so far, Varmia has shouted out the voice of our land mainly on the Polish soil – the voice of disquiet, passion and agitation. It is now time to hear it echo throughout the whole world. Varmia still has many stories to tell, and we are very excited to work with such well-respected people from overseas. We have many spirits yet to summon.”