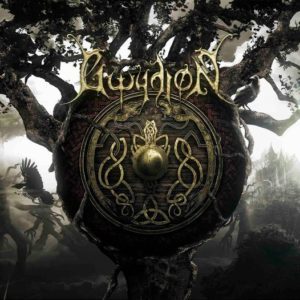 With a fifth full-length album named after the band comes “Gwydion” from Portugal with a well-worked sound that has nothing to envy to other renowned bands.
Folk metal fans will easily be able to compare Gwydion’s sound with bands like Ensiferum or Finntroll – or even much more recognized bands from other metal genres – and understand why the band is up to the task thanks to their experience.
Pedro Dias’s voice is the perfect presentation for this album from songs like ‘Ale mead and wine‘ or ‘Battle of Alclud Ford‘. This is accompanied in a very well worked way with all the other instruments that give it that energetic and epic touch that we could say comes from the magical power of Gwydion himself – the powerful mythical character from whom the band takes its name. The melodies are not repetitive and even the harmonic changes help make the album very enjoyable. On the production side, you can see the experience of the record label and the team involved with the overall sound quality – I personally loved how the vocals and chorus were worked.
As a not so positive aspect, we could get to analyze that the theme of the band and some musical aspects are very good, but they are also very seen in the folk-metal scene, or that calling their fifth album as it is usually called the debut album of a band leaves a feeling of emptiness as if it were necessary to give this work its own voice. However, everything was made for a reason and their work is excellent.
Finally, we must not overlook the fact that this band has been working for more than 20 years, and with albums as good as this one, they deserve to be heard.
My favorites: “Hostile alliance”, “Dead song” and “Hammer of the Gods”.