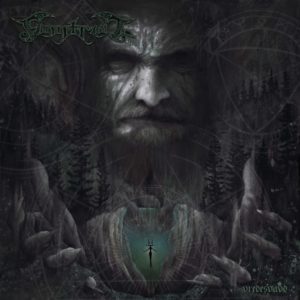 1. Finntroll – ‘‘Vredesvävd’
55 out of 60 points, well well, that’s a winner for sure. The whole team had the latest Finntroll album in their top 3! Their last album dated all the way back to 2013, but what a hell of a comeback they made.
Albums like Ur Jordens Djup and Nifelvind remain in my regular rotation, soon to be joined by Vredesvavd. Singles like Mask and Ormfolk could easily nestle in either, despite being conceived a decade apart. Ever familiar entrances, interchanges and melodic aura help to forget the passage of time with supporting gang hymns teleporting to forbidden Forrest soirées.
It should also go without saying that Mathias “Vreth” Lillmåns continues to excel as frontman and vocal expert of the harsh persuasion that only gets better with time, like a yummy spicy whiskey. Not overshadowing the arrangement expertise of keyboardist-composer Henri “Trollhorn” Sorvali. Their latest creation thoroughly satisfies every expectation and scratches all folk metal itches, in complete blackened humpa abandonment.

2. Lör – ‘Edge of Eternity’
The best album of 2020 according to one of our teammembers and lots of points by the others delivered Lör the 2nd place on our Best Album of 2020 list.
“Lör inundate authenticity, from the independent production and original composition to Greg’s breathtaking artwork. This album is an ideal combination of novelty and nostalgia, deeply rooted in progressive elements of classics like Uriah Heep that mold into superlative, contemporary, power. Lör belong to a small collective of modern American metal acts that are as adventurous as they are confident in integrating a breadth of influences into a dramatic but cohesive unit with harmonious, valiant instrumentality that refuses to un-burrow from my psyche. Is the album a bit short? Sure, but there is no shortage of creativity with rumors of another looming release. Additionally, each member has notable projects worth exploring and personally, I can’t get enough! Edge of Eternity catapults to this year’s best lists and promises to garner well-deserved validation.”

3. Ensiferum – ‘Thalassic’
With a total of 38 out of 60 points Ensiferum managed to divide and win. With lots of points going to Isenmor, Romuvos and XIV Dark Centuries, Ensiferum managed to be just ahead of them. With their new clean vocalist and a style a bit more leaning to power metal, the band took a slightly different road.
“Every band has eras in their existence, and I feel that most will draw lines of separation in Ensiferum’s timeline. Is it Emmi or post-Emmi? Is it Jari or Petri era? Or maybe early albums or Metal Blade albums? Whatever it is there still is no question that they are still in the conversation in top folk metal related acts. With a new album looming in “Thalassic” the controversy of another new era in their storied history I am sure will start.”

4. Isenmor – ‘Isenmor‘
We find the winner of the ‘Best Debut Album’ at the 4th place in the overall competion. This one was even voted as the best album by one of us. We take a deep bow for them.
“It’s probably too early to call this a “classic” for the ages but it really has that feel of an album you have listened to hundreds of times in your life and always go back to. I love the mix/sound especially the vocals and violins being front and center but never drowning out all of the other incredible things going on. While I thought Poland’s Windmill had debut of the year wrapped up, “Shieldbrother” in one fell swoop has taken that spot over along with a very high position in the overall top albums of 2020 for me….move over Finntroll, Zmey Gorynich and Amiensus.  What is “American” folk metal? Raise the stars and stripes as this album is probably one of the finest examples to date and one that will stand the test of time….amazing album.”

5. Romuvos – ‘The Baltic Crusade‘
The second album with 33 points is ‘The Baltic Crusade’ of Romuvos. The third album of these Lithuanians is a real killer. This album was choosen second best by two voting members.
“For me the release has no weakness at all and as a piece of advise I would recommend already the first track “Saule(1236)”, which will most properly drag you into this great band. In my opinion Romuvos is one of the most underrated folk metal bands these days and actually they belong up to the big stages.”

6. XIV Dark Centuries – ‘Waldvolk’
At the 9th place in our list we found Gernotshagen. Another German band, XIV Dark Centuries was away for quite a while as well, and they came back this year with an album called ‘Waldvolk’. This album is the first one of the three bands who scored 33 points.
“While I don’t think there is anything that is super unique on “Waldvolk”, everything on here has a familiarity that makes you want to listen over and over. They didn’t overdo it and kept it relatively simple but strongly crafted. The beginning and ending instrumental pieces (“Heimwaerts” and “Nott”) could have been omitted but they don’t annoy me in the context of the rest of this killer album. The sound is heavy and detailed, far surpassing their previous works giving it another massive thing going for it. Sorry to say you are going to be waiting another 2 plus months for this one, but it will be well worth the wait…….and a forerunner for album of the year candidate for 2020.”

7. Aether Realm – ‘Redneck Vikings from Hell
A small leap of 5 points and we see Aether Realm at the 7th place with 28 points.
“Æther Realm’s latest release is by far their most extensively differentiated. Since their debut took a while to grow on me, I was rather surprised of the immediacy of impact that Redneck Vikings From Hell had on a track by track basis. There is certainly an incredible range of materials on offer with this album. While sometimes it feels like a mash up of completely different ideas, the lyrics come from the heart. The ideas are novel, and the humor is hard not to love. But as to whether this album is for you, there is one simple test: Do you fancy the idea of a song entitled “Redneck Cowboys from Hell” on a Metal album, which combines blatant country influences with Death Metal? If that idea does not appeal this album won’t either.”

8. Trollheart – ‘Once Upon a Troll’
With 23 points a well deserved spot on our Best Album of 2020 list.
“Basically the album consists of 9 songs and 4 Interludes ( Intro, Interludes, Trollish Outro ) and The Troll build around himself his own world including blubbery pots, lumberjacks as victims, swampy woods and of course his hut. All this details are perfectly put in place and can be also found in the great mix of epic folk black/death metal. It is impressive that this release was done by one person only. As we are just at the beginning of the history of Trollheart I sincerely hope to hear more from them in future. With this debut they certainly set a fantastic step into the right direction.”

9. Gernotshagen – ‘Ode Naturae’
Gernotshagen is back and how. A great new album.
“The album does feel like a natural continuation from “Weltenbrand” so no new direction in terms of sound or style which could be considered good or bad. If you are expecting something completely different then I would say you would be disappointed. However, if you are a fan of their releases up to this point (like me) you will be happy with the results. The highlight here for me is the epic almost 18-minute album closer “Transzendenz” which really is a perfect way to close this chapter and one you can really get lost in. There is a nice clarity, almost non-metal feel to the sound which could come across as strange but really works….the detail and naturalness add to the power of the tracks and doesn’t hide anything. With “Ode Naturae” it feels like the 9-year span never happened and this is plenty of great tunes to make up for lost time. “Comeback”? It feels like they never left….great album.”

10. Elvenscroll – ‘Never to be Mourned
One of the newcomers of this year. They gathered 20 points which is quite a lot for a no. 10 on the list.
“What makes this EP stand out? It is one of those albums that clearly show that not all Folk Metal bands play happy folk music or focus more on the folk than the Metal, which is one criticism frequently made about the genre. Korpiklaani’s Kulkija is Folk metal and Elvenscroll’s Never to be Mourned is folk Metal. And as always it’s interesting to hear bands that don’t stick to a formula. As long as listeners can freeride with an album’s energy, and doesn’t mind iffy keyboard patches, this album is an essential of this year’s Folk Metal releases.”

This is our Top 10 of Best Albums 2020.
Luckily we still have different opinions in our team, but we were never feeling so alike as this year.
Our compliments to all the band which dared to release a new album this year. We make deep bow.

Six of our teammembers could find the time to rate the albums. The maximum score they can give is 10 points. Which means an album could get a maximum of 60 points.
Every member could nominate two albums which are rated by the whole team.