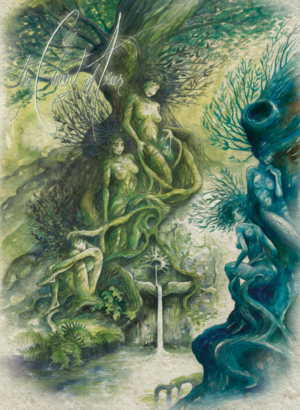 With “The Chant of the Trees” we received the first debut album to review for the next year, which is scheduled to be released via Shaman Voice Production on the 01.02.2021 (digital release). At the moment there is not really a lot of information available about this new band. The only things I can say is that The Chants of the Trees is a new project coming out of France and that they describe their style as Meditative Folk Metal. It is really astonishing how the band is able to create a perfect fusion of relaxing meditative music and metal. Even that I was only able to pre-listen the first 5 tracks of this album, I was immedialtey convinced by the great atmosphere which is created with a mix of nature sounds out of the forests and the sea ( i.e. birds singing, whisperings of a creek, sea waves), in-depth going accoustic guitars, flutes, pipes, clear female/male spoken words and singing along the meditative music mixed with some metal elements. The metal parts are implemented very wisely and are coming party very slow, sometimes in mid tempo, but always perfectly fitting into the concept and atmosphere. A brilliant project just to lay back, relax and let the music take you away. My personal highlight so far is the over 10 minutes long epic track “The boundless Seas Part 1”, which is perfectly melting all elements of the genres mediative folk and metal. Furthermore the beautiful artwork of the cover is matching perfectly to this album.Unluckily at this moment the only song which is already released with a music video is the title track, which already had been posted on our homepage. Currently there is running. I would love to give this release the full score, but only could pre-listen to 5 of the 11 track 57:34 min album. I can not await to hear more from “The Chant of the Trees” and keep the fingers crossed that the fundraising campaign will be succesfull! It seems we have a very good prospect to the year 2021!

The Chant of Trees