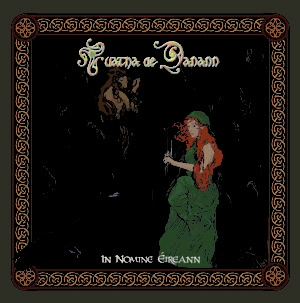 2020 has certainly been dismal on many levels. With it thankfully drawing to a close and with 2021 certain to be much better, how about an upbeat album to usher in the start of a new year? December 10th sees the latest offering from Tuatha De Danann titled “In Nomine Eireann” (let’s go with “In Ireland’s Name” as a translation) and it will satisfy many a folk metal listener. Let’s start with the band……along with Cruachan and a few others, I believe that folk metal starts with acts like TDD but they have woefully been overlooked. Why? Being in existence since the mid 90’s, I can only assume maybe locale (Brazil) and lack of a real push to extend themselves outside of their homeland……just a guess but they should be in the conversation as one of the leaders in folk metal’s creation. Plus an extended time gap in between albums (2004-2015) doesn’t help. In any event, the new album features 11 tracks that pay tribute to Ireland with traditional tunes with a modern flair. While I feel a majority of folk metal bands are metal bands with a folk influence, I think the opposite is true with TDD. The metal is there but I feel they are basically a folk band with an equal amount of metal elements. There is a very similar vibe to Korpiklaani in their style. For this album I think this ratio really works in taking the tracks which have a familiarity to them and giving them new life. There is a slew of guest appearances amongst the tracks most notably for our interest is Keith from Cruachan adding vocals to “Molly Maguires”. Overall, the album is a fun listen with one of the best sounding albums to come out this year….super detailed and smooth. If I had one negative (and it really isn’t a big one) is that it really doesn’t sound like a Tuatha De Danann album to me. After checking out their discography again before the new album, some of the power metal elements and more other identifiable factors to their sound are not really here. It does make sense that with all of the guests that the trajectory would be altered so again not a big deal. Want something to appease your folk metal and traditional folk hunger? “In Nomine Eireann” is definitely one album to do so, even if it doesn’t really have all of the parts of Tuatha De Danann that you may already be familiar with.