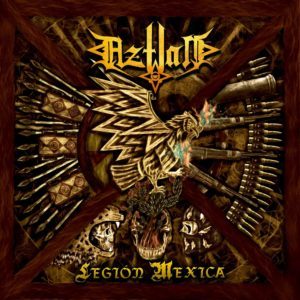 Mexican Guitars mixed with Aztec Folklore and Melodic Death Metal are opening my folk-metal.nl year 2021 with the first track “Sangre por Sangre” from​ the second full-length release “Legion Mexica” by​ Aztlan. The seven-headed band out of Mexico City is once again making no compromises and are following the traces of their roots and deliver​ us a very strong second album. While listening to the first four songs​ I have the feeling that “Legion Mexica” is a little bit more “progessive” compared to their debut. It is hard to describe it, but mix​ together​ Brujeria, Cemican, Aztec folk music, a Mariachi band​ and Enslaved and if you shake that long enough you musically​ receive Aztlan. In respect of the vocals “Attila” and “El Patron” still have a competition going on who can growl and scream louder and harsher.​ I would say it is a clear “draw”.​ With the fifth and title track “Legion Mexica” the atmosphere of the album is changing​ a bit and the tempo is getting slower, the folk instruments overtake the lead, while the metal music​ seems to only accompany​ this 12 minutes of a folky​ monster track. After the instrumental “Dia de Muertos” the band is increasing the tempo again and the mix between pre-hispanic folk and extreme metal could not be done in any better way. With 9 tracks and 79 minutes Aztlan is using every free second of this record without having any gap fillers. Furthermore the band is really understanding how to present themselves using different Mexican sceleton customes. If I made you curious right now you can watch them perform in their two new music videos for “Sangre por Sangre” and “Dia de Muertos” on their homepage or on Youtube. Aztlan made the right step into the right direction and I really like their Progessive Melodic-Death/Folk Metal approach. By the way for all collectors out there,​ I got the information from​ the band that both of their releases are available on CD and can be ordered at the band directly (mail/messenger). Muchas Gracias Aztlan​ for this solid second release!​ ​ ​ ​