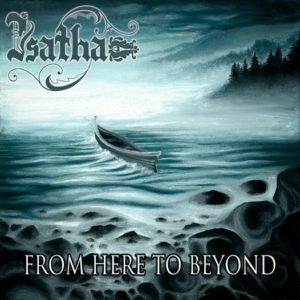 From here to Beyond is a noteworthy album with because of how it succeeds at many difficult tasks. Firstly, there isn’t an overarching formula, and while there are some consecutive songs taking the same cues in terms of musical influences, there is a decent diversity of songwriting present here. Secondly, and perhaps most importantly to Metal purists (and even who bargain more on the Metal part of Folk Metal), the Folk instrumentation knows its place and is there as a compliment to the Metal and not the other way around. There is much to discuss here, so this review will go through the album song by song. Because the lyrics tend to be of a more sentimental nature we will not be discussing them extensively, and merely deem them “relatable”.
Beginning with the intro, the intro kicks off with a forest ambience much like the intro to Cernunnos’s Svmmoner EP (reviewed on this site last year). However, instead of the hurdy gurdy and other folk instrumentation, the keyboards are at the forefront and opt for an eerie celestial dreamscape that sounds like an elf ascending to heaven on a foggy cloud of tears (no I’m not joking). There are some equally eerie sounding choirs tinged with a nameless sadness before the first track, “Whirling Deep Green”, plays.
Now, there is a tendency for many albums to open with their strongest song, and it would make sense why the “moneymaker” should be first in line. Perhaps that was the effort here, as the song is by far the most impressive overall. The folk instruments only show up to compliment the music, there’s emotion both to the lyrics and the music, the choirs have the same melancholy as the intro, and when the clean vocals line up with the growls, they don’t just compliment the harsh vocals by doing so, but embellish them as well. Everything just falls into place, in fact there is nothing wrong with this song, down to the production values, and the patch used for the orchestrations. In fact, this song would be nigh-impossible to replicate live to the same standards. There’s just too much for anything but an arena tour. But in all fairness, the DragonForce levels of sound mastering isn’t such a issue because the rest of the album is of similar quality (even if not equal in complexity) and make up in terms of a more organic sound.
“Nature Arise” keeps some of the intricacies of the previous track but has a more simple sound. Additionally, song is much heavier and even the folk instruments has some bite to them. Harsh vocals range from the growls to more fleshed-out, clean female vocals, and there are even slow sections near the solo featuring serene keyboards to underscore the dynamic range.
The next section is a classical sounding interlude called “Cliffs of the Sea”. After the interlude the rest of the tracks follow a pattern. “Pan” and “Gift” have harsh breakdowns, a simple rhythm and lots of fury. The last two tracks before the outro sound heavily influenced by Arkona, even down to the vocal delivery. In many ways these are like their own cycles in a grand narrative, but for the purposes of brevity I will look in detail at one of each pairing.
“Gift” is slightly more interesting than “Pan” (which feels like a low point on the album). The song begins with downtempo riffing and your typical joik-sounding chant, where the song goes back into a high speed breakdown with vocals ranging from a black metal shriek to deep growls. The main drawback of this track is the flutes do sound like a bland folk melody compared to other tracks, and the keyboards don’t feature as clearly as in other places.
Of the remaining two songs, “Feast with the Fallen” is a neat package of Arkona influences and the trends set on this album. There is the uptempo wind piping accompanying the familiar female vocals, but there is also some chirpy guitar work that would make it an excellent drinking song. I could describe it in detail, but many readers are no doubt familiar with the “Pagan dance with metal riffs” that are a staple of Slavic and Nordic Folk Metal bands.
While this reviewer tended to be hard on bands that do formulaic songwriting, the cyclical approach to album structuring is an interesting take on it, and with so many tried and true methods, that earns a band marks for creativity and standing out. From here to Beyond is an excellent album, and while going down any individual musical route on this album would most likely be a solid release, the three well-written approaches make for a singular experience that should not be missed.