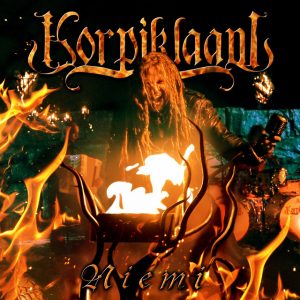 While revisiting a load of the old Finnish Folk Metallers, I was intrigued to find that Korpiklaani had released an EP entitled ‘Niemi’. Now the answer to the question many readers will be asking at this point is: no, this time it’s not a polka album with guitars added in. Although the folk instruments are dominant across the album and have the spotlights during the solos on tracks like ‘Sanaton maa’, the overwhelming majority of the album features driving guitars and some heavy beats. “Mylly” is a ballad-paced rocker with the leads done by the violins, and unlike on ‘Sanaton maa’, they aren’t played with the same bite, and instead play the role the guitars would normally take in driving these songs. Because the rest of the instruments carry the heaviness, the violins don’t feel like a problem even though many people might frown on substituting folk instrumentation for guitar leads. The eponymous track ‘Niemi’ is an excellent example of what Korpiklaani can do when they truly feel like writing Metal music. The accordion and violin dominate the music but do not do so at the expense of the guitars, which is one criticism this reviewer has heard directed at the band before. At one point ‘Niemi’ even featured what sounded like a tambourine which was just the icing on the cake in terms of the rich complexity brought to the table. ‘Leväluhta’ is the only problem with this release. There’s nothing wrong with the track, and it makes sense why they would put it on the album, but it just feels half-baked compared to the other material on offer. And if the rest of the EP followed a more folk-oriented direction, the track might be more welcome, but it really feels slightly out of place considering the sound the rest of the tracks went in. Overall, ‘Niemi’ is a welcome return to roots and is in some ways more promising than the earliest Korpiklaani releases. All that’s left to do is to sit and wait for the full-length album to be released (and maybe see how many bonus disks it takes to fit all the versions of ‘Beer Beer’ on),