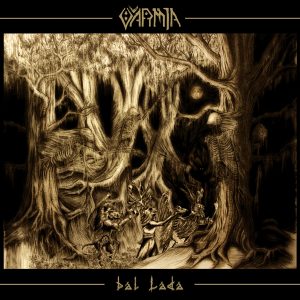 The Polish folk/pagan/black or as they call their style themselves “Polish root metal” band Varmia will release their third full length album “Bal Lada” on the 12.03.2021 via M-Theory Audio. The band’s name Varmia relates to the district Warmia in the North-Eastern part of Poland, which is inspiring the band in keeping the heritage of the same alive in using the fusion of metal and ethnic sounds of the Baltic rites using traditional instruments such as the goat horn, tagelharpa and wooden tubes. The lyrics are kept in Polish with some elements of the ancient Prussian language. After a short Intro the release already starts off with their first single “Bielmo”, which already had been released in December 2020. Heavy guitar riffs open the first song of the album, the typical blastbeats of the Black Metal parts keep first in the background in order to involve during the title. Slower and more doomy parts interplay with black metal parts giving this song a very special style. The vocals are a mix of slow growls, cleaner episodes and do not miss the typical black metal spits. By the way the vocals are mainly recorded in the forests of Poland in order to capture the natural woodland reverberations  The traditional instruments are clever used in order to give the composition as well a mythical or if you like folky touch. In short words the release could not start in any better way. With the next song “Ruja” the black metal parts gaining importance and will excite all Pagan Black Metal fan. The next highlight for me is their second single “Upperan” in which the band is again more willing to experiment. Clean vocals/chants are added and also the traditional folk instruments play a bigger role again. The release continues with a very unique mix of partly nearly doomy and blackened Pagan Metal with folk influences. Varmia is also not holding back to bring some variety and the track “O” stands out with a nearly kind of “Nordic Ritual” approach, meaning that the traditional instruments and nearly meditative chants are overtaking the main role and bring a total new atmosphere to this record. Varmia is definitely following its own way in all aspects and are reaching their next level in the bands history. A great sign for the same is that Varmia is part of the “Heathen Heroes Europe Tour 2021” playing as support for the Pagan/Folk Metal Legends Tyr, Arkona and Dalriada during the 28.09 – 10.10.2021 in Sweden, Denmark, Netherlands, Belgium, France and Germany. With this great new release I am sure that Varmia will wider their fan base easily and will strengthen their position in the Pagan Black /Folk Metal szene.