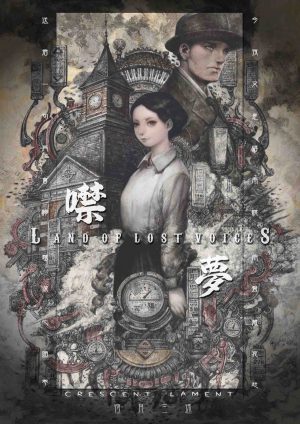 There has always been a degree of controversy surrounding Gothic Metal, not to the same extent as other subgenres, but its there. One argument made from the Goths has been that Metal lacks the sublime, transcendent qualities that they perceive in their music. Obviously that doesn’t even touch the nuances of that debate, but this review is not meant to touch on genre debates. Instead, the mention of that sublime quality of the music needs to be brought up to showcase something that sets Crescent Lament’s newest album apart from other Folk Metal bands hailing from the South East of Asia.
I’m always game for Folk Metal mixed with Doom, and I decided to give Land of Lost Voices a listen because Crescent Lament plays a mix of Gothic Metal and Folk Metal, and it cannot be denied that Gothic Metal has its roots tied to Doom Metal. Having also enjoyed the music of Tengger Cavalry and such bands as Nine Treasures, I thought that Crescent Lament would be a heavier or perhaps more extreme version of that sound. But I was wrong, and not in a bad way. Land of the Lost Voices goes beyond the normal boundaries of Metal and the joyous merriment we are so accustomed to in Folk Metal. Instead there is definitely a nameless sublime and stirring beauty to the music they choose from Asian folk. Any descriptor that could apply to purely Goth music could also be put in here: tragic, melancholy, passionate, soulful. In fact having been in orchestra for most of high school I can pick out what sounds like neo-classical music played with the same sentiment and dedication as any other band writing songs of romance and sorrow.
As to the album’s music itself, the first few songs of the album sadly disappoints in the Metal department. The guitars are neutered and stay lurking in the shadows while the typical drawn out Asian melodies create this vaguely ominous sense of foreboding. It’s only because many songs like “The Northern Storm” and “the Vortex of Collapse” show that they can deal out heavy riffs as well as deeply emotional orchestrations that I do not penalize the album for any of their departures from traditional Metal influences. This album is one of those where every last song clearly tries to underscore its theme and it does not matter if there is a costly tradeoff in the process.
The vocals are reminiscent of many of the more operatic-sounding female vocalists in Symphonic Metal, though I would not call these vocals operatic per-say, unless I compare them to the frontwoman of the obscure band Clockwork Opera, which had a certain elegant neo-victorian charm, which adds to the sophistication that makes up for this album’s potential faults. The harsh vocals are only used when they compliment the music, without exception, and they serve only to amplify the melodies, which is especially apt, considering that this album is nothing but melodies ith the odd heavy song.
I’m sure many purists, and indeed many Metal fans who prefer the Metal over the Folk will probably find this album more difficult to digest, and I also can’t help but wonder whether the “Folk” on this release is purely folk or an innovative way of adding symphonic influences to Metal music, but as long as listeners know what they get and are up for something unique and different, they will not be disappointed. While I’d hesitate to describe this album as a straight up Metal release, it does still stick to the Metal armory for all its transformative musical efforts. If the horizon isn’t out of your comfort zone, lose yourself in this musical reverie; it might not be true metal, but it sure as hell is a true musical landscape.