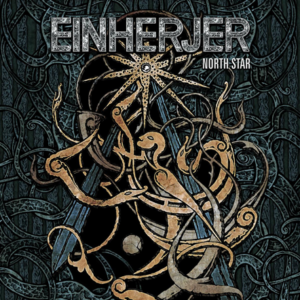 From the bombastic “The Blood and the Iron”, to the weltschmerz bleeding closer “Chasing the Serpent”, Einherjer has brought forth a release that is an immram down a brackish river that leads into a deep cave lined with paintings of foreboding esoteric symbolism. Once the journey ends, and the jaded message of the last track hits true, the listener will be left reeling. There are so many layers to this album, but for the purposes of this review, each song will be summarized, while the bulk of the lyrical complexity is something that needs to be experienced in itself.

“The Blood and the Iron” has a blasting, heavy tempo alternating with the odd raw melodic line, the latter heavily reminiscent of the production quality on their earlier work. Vocals have a fierce quality to them, and the lyrics themselves describe the grit of the all-conquering hero (really, this is the best phrase without projecting archetypal imagery onto the message), which sets the stage for a long of the sorrowful and world-weary messages of the rest of the album. At the beginning of the trip it serves to remind the listener that they are a brave sailor on the seas of fate, and then the album begins to delve into darkness.

What follows is an atmospheric and chilling sounding synth lead, which sets the stage for the very somber “Stars”, with lyrical undertones of stargazing to seek meaning on the course of life. In terms of the music, the sound is slower and more reminiscent of the band’s more Black Metal influenced work. If anything bad can be said about the song, it’s perhaps that the keyboards feel very polished. In fact they are so shiny they look gilded. But overall, they don’t feel overdone considering the production standards across the album, and the tone of the song.

Next is “West Coast Groove”, and honestly, this reviewer feels it has a sour aftertaste. If Metal was in a different place and if the song was positioned slightly differently in the track order, one could say it was a sellout track, made exclusively to market singles. But the industry has changed, and even though they made a music video out of it, the song isn’t bad per-say. It is basically an audience participation song, complete with Rock-influenced riffs, a much happier sound, and catchier lyrics, but to be fair about the lyrics, Viking Metal has its catchy moments.

“Ascension” follows, and more esoterica permeates the lyrics. Here is where the first outright occult leanings emerge. There is reference to “reading the runes” which repeats in the following songs. Aside from the transcendent nature of the lyrics, the song keeps the eerie atmospherics, but takes a slower more morbid sound with the riffs. It would be a stretch to compare it to their first album, but the tone is comparable. This song also marks the beginning of the thematically darker songs, many of whom are similarly dark musically.

“Higher Fire” is rich in symbolism, and begins to call the listener to reflect on the words more. The song drops the soaring chords used in the previous track, and here is the part in the journey where the cave opens to a bleak globe of despair.

When “Echoes in Blood Begins” comes around there is a very melancholy tone to the music. It lacks earlier harshness, and begins to have that essence of Doom that gave the eponymous subgenre its name. The vocals echo the remorseful lyrics and there is excellent ambient sounds across the song, arguably done both through sound effects and the instrumentation.

“Listen to the Graves” begins with a heavy funereal riff, that leads to an intro which, together, sound like a paraphrase on a funeral march. The vocals make heavy use of choirs, but not in the Power Metal or Symphonic Metal sense. With the help of the backing vocals, the chorus sounds like it is performed by a fairly morose choir, and the riffs are also slow and bleak sounding. Thematically, this song is one of the darkest, which makes one wonder why the chords are so happy compared to “Echoes in Blood Begins”.

Finally the serpent devours it’s tail, and the final song reminds the listener about the vicious cycle of routine and mistakes throughout history (perhaps also saying “by the way mate, guess what happens when this song ends?”). Unlike other songs dealing with the motif, such as Lord Vicar’s “World Encircled” the song focuses more on the reality than dwelling on the symbolism. At the end of the day, it’s knowing how horrifyingly real these symbols are that makes them such enduring symbols. But enough about the lyrics, the music itself has a slower pace again, and is darker more in line with “Higher Fire” but more at the pace of “Listen to the Graves”.While this review more than once dwelled on the lyrics, this album cannot be appreciated fully unless one understands the sheer wealth of the symbolism used. This reviewer will be re-listening the album simply to hear the message in full. But enough has been said to do North Star justice musically. Besides for one or two tracks that maybe lapse into unfamiliar territory in terms of riffing and production, this is an excellent Einherjer release, and a good release altogether. One may thumb their nose at the production values but Einherjer have earned the right to not be constrained by traditional Black Metal album conventions. Don’t miss North Star, there’s endless nuance for the boffins, and endless beats for the musicians.