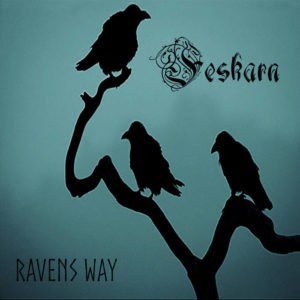 2021 seems to be a year so far with some projects with long hiatuses coming back with new releases. The new Skjaldborg just hit the internet as will the latest offering from Sweden’s Feskarn. Entitled “Ravens Way”, the new album will be independently released in February and features 13 tracks at about 52 minutes of tunes. I was shocked that it has been 7 years since “Östra Aros” but then again it has been pretty quiet in the Feskarn camp. So, what should you expect with the new album? If you are familiar with the earlier albums, then I would say more of the same and it is a slightly off kilter combination of styles/sound. I think putting some of the vocal phrasing of Ensiferum with some of the dungeon synthness of Summoning and music structure of Falkenbach would be as close as I could get. Feskarn is the name of the project and solo member so everything will be from his perspective which I would say is a blend of Viking metal along with his background in electronic music. This combination for me can either be a hit or miss and in the case of “Ravens Way” I am somewhat torn. I like the idea of the keyboard/programming in folk metal with acts relying on it to fill the gap of folk instrumentation or as straightforward keys. In the case of “Ravens Way” I think it has been either overused or maybe too up front in the mix here and it tends to distract your attention to the other aspects of the tracks. The other issue I have is there is somewhat of a chaotic blend of tracks here which really don’t feel like they belong together as a collection of songs. For example, the first couple of tracks (“Ravens Way” and “Broken World”) are pretty direct Viking metal with the keys, the next tracks have some traditional folk/vocal touches and then the next tracks have maybe more of a death metal feel…..I found this to be very confusing to listen to, almost like different projects altogether. Considering the 7 year layoff, possibly tracks written at long intervals between each other? Whatever the case, overall, the album is decent and has some killer moments but could have done with some tightening up in the cohesiveness of the tracks and the final mix.