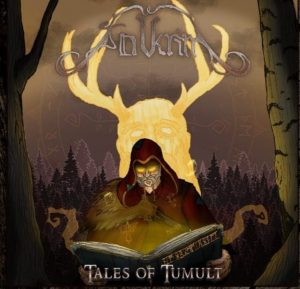 Folkrim is a very young band, which just had been founded in the year 2020 in Rauma (Finland) and just released their Debut Album “Tales of Tumult” on the 19.02.2021​ via Weak Skull Records. Beside of a small entry in the Metal Archives (without Members) and a Facebook Site there is not really more information you can get about Folkrim in the net. The album is starting with a melodic acoustic Intro “A Fate Foretold”​ which is ending in some shamanic chanting till the record really hits off with the first track​ “Santulla Saahaan”. From that moment it is clear that the opinions about this release will differ heavily. Some will​ say this is a cheap copy of Korpiklaani, some will say it is a good copy of Korpiklanni, however the first track really sounds very much like Korpiklaani. The “Humppa-Metal”, the arrangement of the song structure​ with strong hooks and the smoky raw voice of the singer really reminds on the early days of the Finnish Folk Metal Pioneers. Openly I do not know why Folkrim has​ chosen this title as opening track, due the simply fact that the band is showing a much better and own side from themselves in other songs. I can really only recommend to keep on listening, it`s​ worth it. Already in the next track “Hoist the dew” Folkrim are​ combining very fast Folk Metal with melodic chants/shouts​ and​ some very nice​ Pirate-Metal shanty atmosphere. “Äventyrsvisan” is coming slightly slower, but as well more aggressive and the first time you get some kind of growls and blastbeats on the album. The lyrics of this release are partly in Finnish, partly in English, but the topic​ seems always to be the same:​ Drinking, Booze, Alcohol and Drunkovers​ :-)The songs “Star”, “Thirteen Pints”, “Golden Rum”, “Cigars and Grog” or “Drunkover” are underlining this “great new innovate concept of an​ album” (sarcastic). However what I also need to state is that I really felt entertained and had a lot of fun in repeatly listen to those songs. Simple drinking hooks as “Give me thirteen pints of Beer, this is why I am here” might not be the​ highest lyrical performance, but easily becomes an earwig. Musically all songs are very well produced and presenting a very nice mix of Folk Metal, Humppa-Metal and Pirate Metal. As small little weakness I see the song “Nightfall”, which should​ come​ as a “deeper, more mature”and​ slower song​ of the album, but it does not work out at all.However at the end it is to say that I really enjoyed listining to this album and I strongly believe that the concept of “Folkrim” (even not new) is working out and you receive a very solid debut. If Folkrim is able to bring those drinking songs with the same quality as on the album​ live on stage, then I am sure that they will be responsible for the one or other hangover of their fans. ​ ​ ​ ​ ​ ​