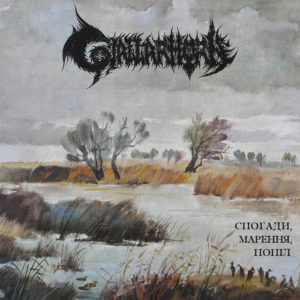 One of my favorite releases from 2019 and one that I felt should be required listening was “The Black Tower” from Ukraine’s Gjallarhorn. A very unique release in the form of a concept EP, “The Black Tower” still holds up 2 years later. We now a have a new release in the form of what I would call a compilation/new release from them entitled “Memories, Nightmare, Ash”. The release officially came out in December 2020 and features 8 tracks and 51 minutes of music. Since “The Black Tower” Gjallarhorn contributed tracks to a compilation that we did not review in 2020. “Shadows Over The Southern Steppe” featured Ukranian acts in Dämmerung and Demonium with 3 tracks from Gjallarhorn. Luckily for us those 3 tracks are here (“The Twilight Song”, “The Ocean” and “The Heathen Circle”) The remaining tracks are new and not previously released, although closing track “The Hangmen’s Hill” was released as a lyrics video but never on an actual release. One thing I will say about acts from Ukraine is that they all have a sound that you will not hear anywhere else….it is intangible but definitely noticeable. Acts like Zgard and Paganland along with more widely known acts like Nokturnal Mortum and Kroda all have a unique feel about them, and Gjallarhorn is no different. The 1st 4 tracks are all brand new and absolutely killer. While I have made it known I cannot really get into intros, the first track here “In The Breath Of The Wind” is more than just an intro but a 4-minute instrumental that really sets up next track “On The Plundered Graves” perfectly. Still pretty heavy, this collection of tracks I feel are more accessible for a wider audience with tempos dialed down and maybe someone like classic Agalloch is a good comparison here. The highlight here is definitely the title track with a blend of what I would say thrash/black metal and may be the most unique track they have offered to date and at 8 plus minutes, a real feast for the ears. The tracks seem to all be in Ukrainian despite the English titles with the exception of “The Heather Circle” which is in English and was originally written for the website/organization compilation of the same name. Overall, this is superb collection of everything that Gjallarhorn has done and can do. A great release and well worth the listen for the new tracks and maybe those ones you may have missed the first time around.