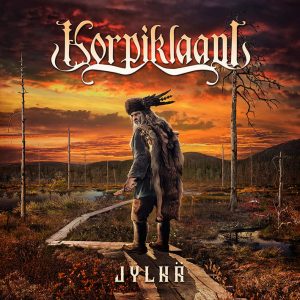 Korpiklaani surely counts to the epitomes of Folk Metal and therefore my expectations of their new album “Jylhä” had been quite high.Since their last record “Kulkija” it was​ never getting quiet around them and since then​ they released a “hundred felt” versions of the song “Beer Beer” in various languages collaborating with artists from all over the world. Due their​ big fascination of “Beer” was not enough they also bewitched us with their single “Jägermeister” and slowly and steady are working off songs for​ all alcoholic beverages, which are available out there. For sure the opinions will​ differ if that​ was just pure fun or simple annoying. I am only sure that those songs will work​ live​ and will animate the audiences for the one or other drunken moshpit. For me it seems that Korpiklaani tries to find the balance between their legendary drinking/party songs and more mature story telling approaches, which we already could clearly discover​ on “Kulkija”.On “Jylhä” they bring totally new elements into their music and without no doubt they are winning with the same. Already the​ first track “Verikoira” excites with heavy guitar riffs and the sound feels much harder and aggressive, but no worries the folk instruments play the same role as always and no Hummpa Metal fan needs to worry at all. With the next track “Niemi” we​ are right back in their core business and the accordion and violin are challenging each other in an iconic way. However their willingness to experiment is much higher compared to previous releases. In “Levälutha” Reggae or nearly Ska influenced episodes interplay with the typical Korpiklaani sound, while on “Mylly”,”Tuuleton”or “Miero”​ the tempo​ gets slower and the mood becomes more melancholic and feels more seriously. On the other side you​ receive with “Sanaton maa” or “Huolettomat” fantastic epic melodies, perfectly composed and arranged. The biggest experiment and a​ song you need to get used to is “Pidot”, which contains some “country” or “western-like” parts. As already indicated the album is full of surprises and the last song “Juuret” is most​ properly​ the slowest beginning song I ever heard by Korpiklaani and it does not really fit to them, so I was somehow relieved that after 2/3 of the title the tempo is​ going up again and finally ending in the usual speed of the Finnish Folk Metal Pioneers. In fact it must be very hard for a band like Korpiklaani to always reinvent yourself without losing your roots and to keep your fan base happy. The band is out there since 2003 (Shaman or Shamaani Duo since 1993 ) and with the number 11 “Jylhä” they proof that exactly this is possible. This 60 minute​ record has no gap fillers, is innovative, is​ bringing new influences into their established Folk “Hummpa” Metal style and moreover is​ never getting boring.The development from their first album “Spirit of​ the Forest” (which is a​ Folk Metal classic) up to today is just astonishing and deserves my full respect.​ ​ ​ ​ ​ ​ ​ ​ ​ ​ ​