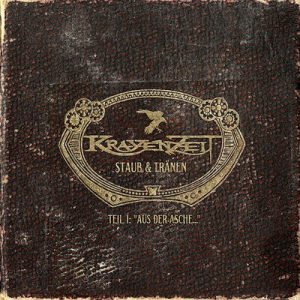 Krayenzeit became starting from their foundation in 2011 since today to a fixed institution in the genre Mittelalter Rock (Medieval Rock) and are presenting us with “Staub & Tränen Teil 1: Aus der Asche” their meanwhile 5th full-length studio album, which had been released on the 22.01.2021 via Trisol Musik Group. Since their debut “Auf dunklen Schwingen” in 2015 Krayenzeit are entchanting us with a mix of hard riffs combined with medieval, irish/celtic or even oriental influences which make their sound quite unique. In other words they are not shy in entering new fields and are open to experiment, while the main focus is clear and always lays in the catchiness of their melodies. Krayenzeit wanted to celebrate in 2020 the 5th anniversary of their debut album, but due the CoVid-19 pandemic and the connected restrictions in respect of concerts they decided to work on new song which led to the outcome of their new album Staub & Tränen Teil 1: Aus der Asche (“Dust & Tears Part 1: Out of Ashes”), the second part should still follow in 2021, but no release date is confirmed yet. After an very epic intro the album starts with the song “Wir sind Geschichte” (“We are the History”), which is basically a homage to the life itself (sometimes sad some beautiful). Heavy rock guitar riffs continue to interplay with folk instruments as the hurdy gurdy, flutes and cister, while Marcus is responsible for the clean vocals and is supported by Annie and Alex with choirs. With the track “Rabenfänger” (“Raven Catchers”) Krayenzeit is giving more room to the guitars and you receive a fantastic guitars solo as well, in which Wolfram and Alex can show their full talent. Choirs and nearly orchestralic elements are kicking off the title track “Staub & Tränen” and with the same you are receiving their first very epic  rock ballad including very deep lyrics. Slowly only with slow accustic guitars and carefully used folk instruments and a very strong voice the band shows us with “Unsterblich” (“Immortal”) that they can also deliver a beautiful arranged accustic compositions. In contrast to the same “Bund der Krähen” (“League of Crows”) and “Durch den Strom” (“Trough the storm”) are coming back with their core genre. The track “Je länger umso besser” (“The longer the better”) elates with happy harmonies, good mood and should be welcomed in every Irish Pub. The next epic melancholic ballad awaits you with “Willkommen im Nichts” (“Welcome to Nowhere”) which really stands in contrast to the general positive vibe of the record.The diversity of the record is really outstanding and with “Küss den Frosch” (“Kiss the frog”) some pop/synth parts are added which overall do quite fit well to the total song. “Mein Bruder” (“My brother”) has for me the most medieval arrangements with a quite slow tempo, but a lot interplays of all the traditional folk instruments. The first part of Staub & Tränen ends with the ballad “Schwerelos” (“Weightless”) and closes this first episode with a taste for more. With the intro and 12 songs, 52 minutes playing time this album brings a lot of variety of styles and is for sure an enrichment for the Mittelalterock szene in general. I sincerly hope that in 2021 this nightmare of pandemic will end and that Krayenzeit will receive the opportunity to present this record live to their audiences.