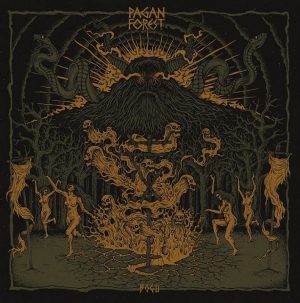 Pagan Forest out of Kwidzyn (Poland) had been established in the year 1995 and already released three Demos in the 90s (1996,1997,1999), another Demo in 2004, a Compilation in 2005 and a Split with “Pure Pagan Craft” in 2018. The actual record “Bogu” is after 27 years since their foundation the first full length album. Pagan Forest is a three men project and as it seems the band was going during their career through a lot of line up changes, while it is to say that Sonoath (Guitars,Keyboard) and Bakis (Vocals) had been members from the beginning and added Mlody (drums) as constant member to the line-up. Even that the band is out there for a long time you can not find really a lot of information about them, beside in the Metal Archives and on their Bandcamp page. The band seems to follow on this record a clear concept in paying tribute to the forgotten spirits, rites and ancient gods and the enternal force of nature. Furthermore they joined the forces with so called “Drewno” singers, who perform historical folk pieces from Belarus, Ukraine, Russia and the Balkans in an authentic form and Pagan Forest is basing their lyrics on Polish poets and writers such as Tadeusz Miciński, Kazimiera “Iłła” Iłłakowiczówna, Ryszard Danęcki,J anka Kupała (Iwan Łucewicz) or Szakalis. While I am not familiar with Polish literature I can only assume that those writers are connected to their concept of Slavic Paganism. So the conception is clear and the approach of the band is to mix above with Pagan Black metal.
The album starts with the “Drewno” female singers who’s chants are accompanied by some traditional folk instruments creating a very mystical atmospheric intro of the first song “Zorza” till the black metal kicks off in the middle of the track. The black metal comes ice cold, reminding me partly on the beginning of it’s genre, very harsh and raw. The vocals mainly consist of gowls in the black metal parts with some exceptions on the title track “Bogu”, in which some clear male singing/shouts are added to a more doomy melodic start in giving the track more atmosphere till the black metal part take over again. All together the album continues with a mix of raw pagan black metal with some doomy and folk influences. Personally I like the approach of bringing in some innovation into the pagan back metal structure, especially with the Drewno singers, which are really giving the whole compositions a folky and mystical touch and are for sure a biggest enrichment of this album. My personal highlight of this piece is the song “Hymn do Svaroga”, which is dedicated to the old supreme god of the Eastern Slavs “Svarog”. The song in general has more melodies and harmonies, which are often missed in the black metal parts which come often too monotomous. However I am sure that this record will be an enrichment in the Black Metal scene and for sure will find the one or other fan in the more folky orientated society.